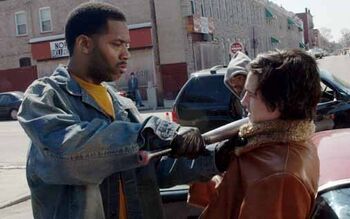 The title refers to the tide effect that traps unsuspecting swimmers; a metaphor for Frank Sobotka's inability to extricate himself from the smuggling operation despite his desire to.

"They used to make steel there, no?"
―Spiros Vondas

Vondas makes this comment in reference to a shut down steel works reflecting the seasons theme of the death of work in American cities.

Colonel William Rawls questions Freamon and Bunk about their case. He tells Freamon he has been detailed to the South Eastern district and recommends that Bunk bring in a fresh detective.

Bunk, Beadie, Ray Cole and Mackey serve grand jury summons on checkers at Frank Sobotka's union who worked on the Atlantic Light, the ship that delivered the container that the girls were found in, including John "Johnny Fifty" Spamanto and Thomas "Horseface" Pakusa. Sobotka is enraged that the detectives believe he knew anything about the girls.

Gary DiPasquale informs Bunk that the hearings brought little information. Out of options, Bunk quizzes Russell about informants in the docks and is disappointed when she has none. Later, Russell visits an old flame in Sobotka’s union named Maui. She sounds him out about becoming an informant while he tries to resume their relationship. He refuses to give her information on his fellow union men but offers a tip – the union computers have permanent records that may be useful in tracking containers.

Bubbles visits the marine unit to find McNulty. McNulty is out on a boat and Claude Diggins radios him to return to shore. When Bubbles sees McNulty botching the mooring knot again, it's apparent that even he has more sailing skill than McNulty. Bubbles reports that he has tracked down Omar Little. McNulty gives him some money and Bubbles asks for more because of the danger he faced.

McNulty brings Omar in to be interviewed by ASA Ilene Nathan in preparation for the Bird's upcoming trial. Nathan is surprised at Omar’s candour and history, but she calls him a sociopath and worries about putting him on the stand in front of Maurice Levy. She gives McNulty a voucher to buy Omar some more appropriate clothes for a court appearance.

Omar shops for clothes. McNulty visits the federal building and asks Special Agent Cleary if he can interview any foreign-national vice suspects to try and interview them about the girl he found in the harbor. Cleary's research finds some girls being held in New Jersey, but finds it hard to understand McNulty’s desire to ID the girl.

Lieutenant Cedric Daniels meets with Sergeant Ellis Carver to offer him a position in the detail. Carver cannot understand why Daniels would consider him after he betrayed him when they worked together on the Barksdale case. Daniels tells him that he thinks he will not try anything similar as he has caught him once before. His condition for Carver is that he will not be recognized as a sergeant and will report to detective Greggs. Herc is overjoyed to be working with his old partner again.

Daniels briefs his new men. He orders DNRs and finance investigations to be done quickly to placate Major Valchek. He puts Greggs, Herc and Carver on drug trade around the port and Herc is pleased that he might get to do some undercover work for once as the dealers in the southeastern district are largely white. Freamon arrives and impresses the detail by immediately recognizing Frank Sobotka from his photo on the board – he tells them of the link to the Jane Doe cases.

Major Valchek receives another photo of his missing surveillance van at yet a different port and dusts it for prints, recovering one. Greggs asks him about using the van and he tells her he has loaned it to the southwestern district.

Greggs, Carver and Herc begin making hand to hands around the port. Greggs and Carver set up a surveillance post in a vacant apartment. Carver watches Frog berate another dealer for spending too much time with his girlfriend. Greggs is annoyed that Herc is taking a long time to prepare. Herc arrives and shows off his props to his colleagues. They find the dealers in the port area much less organized than their old targets in the Barksdale organization.

A white dealer called Frog makes sales in the Eastside. Ziggy arrives to collect money from him. Frog's count is short and he tells Ziggy that the stash was stolen. Ziggy threatens him but Frog remains indifferent. As Ziggy goes to drive away he gets blocked in by two vehicles. Eastside lieutenant Melvin "Cheese" Wagstaff harasses Ziggy for the money he owes him. Cheese is far more effective at intimidating Ziggy than Ziggy was with Frog. Ziggy offers his new leather jacket as partial payment but Cheese is unimpressed. Cheese has his men beat Ziggy and they take his car, telling him that if they have not been paid by Friday he will be dead on Saturday. Frog is on hand to see the whole encounter.

Nick views a house with his girlfriend Aimee. He argues with Elena, who is the realtor, about the name they're using for the area. Since the asking price seems beyond Nick’s means, Aimee suggests that they rent somewhere.

Nick drinks at Delores' bar and finds Ziggy drowning his sorrows. Ziggy relates his problems and Nick chastises him for getting involved with drugs. Nick refuses to help Ziggy initially but when he realizes Ziggy is in danger and has no other way out he tells Ziggy he has already given his share of their takings stealing from the docks to Aimee for an apartment.

At The Greek's café Nick reports the summons to Sergei and Spiros and requests that they put their smuggling on hold on behalf of Frank Sobotka. Vondas assures Nick that the Jane Doe investigation will find only dead ends. Nick tells them that Frank wants to meet with The Greek himself. When Vondas asks Nick about smuggling chemicals, Nick asks what they would be used for and Vondas tells them that it is just business.

Nick and La La visit Cheese to negotiate Ziggy’s debt. Nick asks for the car back so that Ziggy can sell it to raise the money. Cheese offers another week and shows Nick that they have torched Ziggy’s car. La La drives Nick to give the bad news to Ziggy.

The Greek discusses the police investigation with Vondas. The Greek refuses to meet with Sobotka but tells Vondas to double his payment. Sobotka is dismissive of the offer and angry that The Greek would not meet with him. Vondas points out the closed steel factories, leaving Frank to ponder the fate of his union if he cuts his ties to The Greek.

Using the public library's computers, Ziggy and Nick look up the chemicals that Vondas asked them to obtain. They find that they are used for processing narcotics.

Donette visits D'Angelo with their son Tyrell and tells him that Stringer has been supporting her and has plans to look after D'Angelo when he is released. D'Angelo is cynical about their motivations and tells Donette it is about business.

A drug addict disparages the product in the pit and Poot Carr tries to restrain his dealers from beating the man. Puddin calls Bodie Broadus over from his tower. Bodie realizes that the problem is with their product’s lack of quality and says that someone needs to tell Stringer.

Stringer attends his economics class and asks his teacher, Mr Lucas, for advice about selling an inferior product in an aggressive marketplace. Lucas tells him to decrease prices to increase market share, possibly even operating at a loss. He warns Stringer that the product will lose credibility if the price is continually low. Stringer meets with Donette at home and she reports D’Angelo’s troubled state of mind.

Stringer visits the prison and discusses the problems with their product with Avon. He tells him that the East side dealers Proposition Joe and Petey Dixon have the best product. Stringer asks about D'Angelo and Avon says he has to find his own way. Stringer suggests that they put some property in D'Angelo's name to give him something to come home to. Avon tells Stringer that D'Angelo has taken a lot on for them and they owe him.[1][2][3]

Using what he's learned in is business classes, at the funeral home office, Stringer leads a classroom session for his crew, leading them to develop the solutions to their product-quality problem: change the cap color, change the name and divide the product to create fake competition.

Retrieved from "https://thewire.fandom.com/wiki/Undertow?oldid=13556"
Community content is available under CC-BY-SA unless otherwise noted.