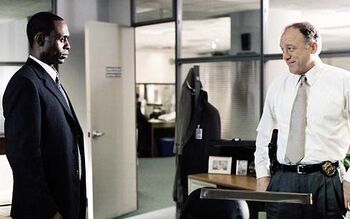 Brandon's bloodied body is discovered in the pit. Wallace gets even more unsettled about the situation after Avon rewards him for his part in Brandon's murder. The detail gets a wiretap running. Daniels clashes with homicide Major William Rawls over their approach to the evidence they have gathered thus far.

The title repeats the shows own title and refers to the wiretap devices used to monitor phone calls made by the Barksdale organization.

"...and all the pieces matter."
―Freamon

Freamon uses this phrase to describe the importance of the individual calls recorded by their wiretap device to Prez. Simon has also described it as referring to the need for the viewer to concentrate on all aspects of the show to follow the plot.[1]

The episode opens on the bloody corpse of Brandon (Omar Little's partner) atop a car. Wallace wakes up nearby and goes through his routine of readying his siblings for school. The police arrive in the neighborhood and as Poot Carr and Wallace leave the house they recognize Brandon's body. Across town, D'Angelo Barksdale dresses at home while Shardene makes him breakfast. They discuss their blossoming relationship and D'Angelo reveals that he believes that all women come with a cost, particularly his other girl Donette.

Wallace expresses his anguish at seeing Brandon's corpse to D'Angelo. D'Angelo unsympathetically reminds Wallace that he knew what would happen to Brandon, and reminds him that killing is part of "the game" of drug dealing in Baltimore. Stringer tells D'Angelo they are bringing Bodie home following his recent arrests. At a court hearing, Maurice Levy lies to defend Bodie's actions and the judge allows Bodie to go free with the condition of twice-weekly phone calls to a parole officer. Herc and Carver later pick up Bodie, believing him to have absconded from custody a second time and are surprised that he managed to get released with a home supervision order.

D'Angelo realizes that his lookout, a girl named Cassandra, is conspiring with Sterling to steal small amounts of drugs and sell them on the side, so he re-assigns them; in order to protect them, he tells nobody, save Wallace. Avon, Stringer, and Stinkum visit the low rises and deliver reward money to D'Angelo and Wallace for their part in finding Brandon; Avon also tells D'Angelo that Wee-Bey and Bird killed Brandon. D'Angelo assures Stringer that there are no snitches in his crew. Avon tells D'Angelo that if he keeps working well he will receive "points on the package" soon.

With Johnny released from medical care, Bubbles returns to the streets. The pair runs a short con to steal copper piping, which they sell to make their next drug purchase. When Johnny goes out to buy more, he is arrested and Bubbles marvels at his bad luck.

Detective Jimmy McNulty meets with Major William Rawls and Sergeant Jay Landsman. Rawls tells McNulty he expects him to finish up the detail and be back in the homicide division in a week's time, which McNulty has no intention of doing. Rawls goes through the ballistics link to the old cases McNulty and Bunk had been investigating. Pressured by Rawls, Landsman orders Bunk to charge the cases. McNulty, Greggs and Freamon meet with Bunk to discuss the impact on the Barksdale investigation. They expect it will prompt Avon Barksdale to change his operations structure and negate all their work. Rawls refuses to shift his position even when Daniels asks him to do it as a favor, but Daniels convinces Deputy Commissioner Burrell to overrule Rawls. Rawls responds by asking Detective Santangelo to keep him informed of any misdeeds amongst Daniels's detail, particularly from McNulty.

In the detail office, Lester Freamon notes the high level of pager activity the previous night. The new wire taps on the project pay phones legally require officers to monitor them; Thomas "Herc" Hauk is dismayed that this will mean long hours of surveillance work. Freamon is angry at his co-worker's laziness and asks what they expected when they joined the detail. After Stinkum chastises Bodie for using his name on the phone, Freamon explains to Prez that the call should be marked "pertinent" because it is evidence of conspiracy, even without providing hard evidence of drugs. Polk stumbles in, drunk at 9AM, and Daniels bearates him for his poor performance, ordering him to either get to work or check into medical for alcohol abuse. To Daniels' dismay, Polk chooses the latter option.

Detectives Vernon Holley and Ed Norris are working Brandon's murder. McNulty discusses the potential link to the Barksdale organization. The detectives complain about waiting for the crime lab because both available units are investigating the theft of patio furniture from a politically influential city council president. McNulty gets a call from Omar and brings his sons to the police station, where Omar, shaken by the sight, identifies Brandon's body. He comes with Greggs and McNulty to the detail. Freamon fits the pattern of pager activity to Omar's description of Brandon's movements. McNulty is angry that they are, as usual, one step behind. Freamon and McNulty interview the arcade owner and Freamon matches the nearby pay phone to the one used the night before. Greggs continues to interview Omar and he offers to act as a witness in the Gant murder case. The episode ends with the police photographs of Brandon's mutilated corpse - the same image that it opened with.[2][3][4]