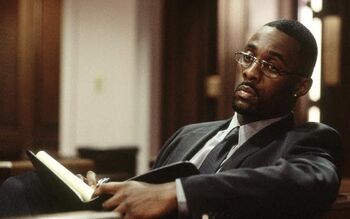 After Barksdale Organization lieutenant D'Angelo Barksdale is acquitted through witness tampering, homicide detective Jimmy McNulty informs Judge Phelan of a powerful West Baltimore drug trafficking organization run by the defendant's uncle, Avon Barksdale. When the judge relays this information to BPD administration, a police detail is formed to investigate Barksdale. Meanwhile, D'Angelo is demoted to managing a low-level crew while grappling with the brutality of the drug trade.

McNulty criticizes Bunk for taking on a homicide case when Landsman's squad was not in detective rotation. Bunk repeats this phrase back to McNulty when he circumvents the chain of command to discuss the Barksdale Organization with Judge Phelan.

BPD Homicide Unit Detective James "Jimmy" McNulty asks a young man about the murder of an alley craps player named Omar Isaiah "Snot Boogie" Betts. The young man reveals that every Friday night, Snot Boogie would steal the craps pot after matching a few bets. Provoked by Betts's thievery, a fellow player shot Betts. When McNulty asks the man why Betts's fellow players continued to let Betts play when they knew he would steal, the young man replies, "Got to. This America, man."

The next day, McNulty arrives at the Circuit Court for Baltimore City courthouse with fellow homicide detective and partner, William "Bunk" Moreland, and reveals that Bett's friend identified Betts's shooter. McNulty intends to observe a homicide trial while Bunk drops off evidence with Assistant State's Attorney Ilene Nathan. McNulty wryly advises Bunk to not answer Homicide phone calls because the pair are not in rotation.

The jury acquits D'Angelo of murder in the first and second-degrees. The Barksdale Organization members celebrate as an irked Barlow threatens Stringer, claiming that he will eventually investigate Stringer's murder.

The bailiff informs McNulty that Judge Daniel Phelan, the presiding judge and an acquaintance of McNulty's, wishes to speak with McNulty.

Phelan asks McNulty why he attended a homicide trial if he was not the primary investigator. McNulty informs Phelan that D'Angelo's uncle is Avon Barksdale, a narcotics trafficking kingpin who controls the West Baltimore drug trade. McNulty divulges that the Barksdale Organization is not being investigated by the BPD, despite Barksdale's responsibility for ten homicides in the past year and repeated witness tampering which has led to three acquittals.

Bunk answers the homicide report of an unidentified man in a vacant house in the Poe Homes housing project. McNulty is amused that Bunk ignored his advice and an irritated Bunk resolves to investigate the homicide alone.

Daniels and Foerster return from their meeting. Daniels informs Kima that Judge Phelan contacted an unprepared Burrell, who has ordered the Homicide and Narcotics units to prepare briefings on Avon Barksdale by tomorrow morning. Daniels instructs Kima to contact the DEA to gather more information on Barksdale.

McNulty returns to Homicide Unit and is greeted by his supervising sergeant, Jay Landsman, who is also annoyed that Bunk picked up the homicide case. Landsman informs McNulty that Rawls wishes to speak with McNulty. Rawls is infuriated that McNulty circumvented the chain of command by complaining to Phelan. Rawls instructs McNulty to type up the Homicide Unit briefing on Avon Barksdale by the following morning.

An irritated Kima types her briefing.

While driving to Orlando's, Wee-Bey curtly reminds D'Angelo to not discuss Barksdale Organization affairs via phone, in cars, or in other non-secure situations.

Avon instructs Orlando to make a recently released felon, Marcell, pay for his drinks. Stringer informs Avon about McNulty's presence at D'Angelo's trial. Avon admonishes D'Angelo for his recklessness and reminds D'Angelo that he must make amends.

As McNulty types his briefing, Detective Ray Cole sleeps and Bunk reveals that Medical Examiner Randall Frazier found a bullet in the body of the deceased man found in the Poe Homes. Landsman reprimands McNulty for bemoaning departmental affairs to a judge. He warns McNulty to be careful or McNulty will be reassigned to a less desirable department. McNulty replies that he does not want to be transferred to the Marine Unit.

The next morning, D'Angelo arrives at the 221 Tower of Franklin Terrace. Stringer informs D'Angelo that he has been reassigned - and demoted, to D'Angelo's chagrin - to The Pit, the McCulloh Homes low-rise public housing project.

The irritated Foerster and Rawls return from their morning meeting with Burrell. Foerster instructs Rawls to have Homicide Unit investigators coordinate with Daniels.

Bubbles purchases heroin with counterfeit cash from Wallace and Malik "Poot" Carr. D'Angelo reprimands Wallace and Bodie for distributing narcotics and receiving payment in the same location. As he counts Wallace's earnings, D'Angelo notices the counterfeit cash and warns Wallace that he will be demoted to a lookout position if he is deceived again.

That night, Bubbles lectures Johnny, who asks asks Bubbles if he can perform the counterfeit cash scam the following day.

After attempting to use counterfeit cash to purchase drugs, Johnny is assaulted by Bodie, Poot, and Wallace. An unnerved D'Angelo walks away.

At a bar, McNulty laments to Bunk the limited visitation times his ex-wife allows him. Bunk warns McNulty about Daniels's preoccupation with his own career.

That night, at Orlando's, D'Angelo wonders if Johnny's beating was necessary to Stringer. He later flirts with dancer Shardene Innes.

Early in the morning and near the train tracks, a drunken Bunk tells McNulty about how he once shot a mouse in his home with his service weapon. McNulty resolves to conduct a comprehensive investigation in the Barksdale Detail.

Greggs visits a distraught Bubbles and an unconscious Johnny at the ER of University of Maryland Medical Center. Bubbles offers to become her Confidential Informant (CI) again to exact revenge on the Barksdale Organization.

Western District Patrol Officer Robert "Bobby" Brown guides Bunk to the crime scene as a crowd gathers. D'Angelo arrives and realizes that the victim is William Gant, the witness in his murder trial.

Retrieved from "https://thewire.fandom.com/wiki/The_Target?oldid=15267"
Community content is available under CC-BY-SA unless otherwise noted.