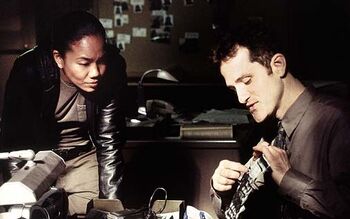 Stringer warns D'Angelo that there may be a snitch in his camp. The detail gets its affidavit approved for a cloned pager but are puzzled at the results. Prez begins to redeem himself in the eyes of his colleagues by taking a fresh approach to the pager information. Wallace spots Brandon, one of Omar's crew, in an arcade and passes the information on to the Barksdale enforcers.

Avon makes this remark to D'Angelo about the dangerous, random nature of their business. It also reflects the detail's delayed wiretap, which rendered them unable to capture the discussion of John Bailey's and Brandon Wright's murders.

Judge Phelan signs the wiretap affidavit for a clone of D'Angelo's pager. Lester Freamon finds that each pager message consists of a seven-digit phone number and a two-digit identifying tag. The phone numbers used do not work, so Freamon postulates that they are using a code to mask the numbers. The simple number-swapping code is ultimately cracked by Detective Pryzbylewski, much to McNulty's delight. Freamon visits Daniels' office and tells him that they need audio surveillance (a wire) on the payphones surrounding the projects to make the case. He knows that Daniels is concerned about his career, but insists that they put the cases first.

Bubbles tells Detective Kima Greggs where to find Omar Little's van, and she and McNulty sit on the van, waiting for Omar to show up, hoping to catch Omar with a gun and convince him to become an informant. McNulty calls his estranged wife Elena McNulty and ask for his sons to come over. He insists he has everything ready, but she does not believe him and refuses to allow the visit. After the fact, he is seen assembling the kit bunk beds for them.

Detectives Ellis Carver and Thomas "Herc" Hauk track Bodie down to the low-rises and violently arrest him for absconding from the juvenile detention center. Bodie refuses to consider making a deal and Herc and Carver respond to his insults with a savage beating. While waiting to hand Bodie over to juvenile intake, however, they end up playing pool with him.

Bunk Moreland gets good news from a ballistics tech: the casing from the Kresson scene confirms the link to the Barksdale association, just as Sergeant Landsman predicted; the gun used in this murder was previously used in two others. When McNulty visits the homicide department, Landsman tells of Major William Rawls' offer, and McNulty finds out that John Bailey, from Omar's crew, was killed. (Though this happens off camera, Wee-Bey takes responsiblity for the murder when informing Avon.) Bunk tracks down a witness in the Kresson case, Tywanda, and she tells them that Kresson told her that D’Angelo was there that night. They learn that Deirdre threatened Avon. They also learn that Orlando’s Club is a Barksdale front.

Later, McNulty and Greggs follow Omar's van into a cemetery, where they parley. McNulty tries to convince Omar that they have an enemy in common, but Omar thinks that working with the police is wrong. McNulty reveals that Bailey has been killed; though Omar pretends to be unfazed, he lets it drop that Bird was the one who killed William Gant.

Avon Barksdale wakes up at a girlfriend's house. The phone rings, but the line goes dead when she answers. Avon tells Wee-Bey Brice to remove the phone lines. Wee-Bey tells Avon he is worried they are being paranoid. Avon refuses to use the first payphone they come to.

Omar Little, Bailey and Brandon Wright discuss their next rip on an East Side corner. Omar draws out a plan to trap the dealers in the alley they use. Omar approaches from the front whistling "The Farmer in the Dell" while Brandon and Bailey wait in the alley.

In the low-rises, young dealers Bodie Broadus and Poot Carr discuss AIDS. Stringer Bell visits D'Angelo and warns him that they think he might have a snitch in his crew. He tells D'Angelo to withhold his dealers' pay and see who does not need an advance to get by, thus identifying anyone with another source of income. Finally, Stringer chastises D'Angelo for letting Poot have a cell phone.

D’Angelo takes his girlfriend Donette out to an expensive restaurant. He worries that he seems out of place, but she tells him that as long as he can pay, he has every right to be there. D’Angelo worries that his upbringing will always stay with him.

Stringer and Avon discuss taking over the Edmondson Avenue corners, as they are wide open. Avon tells Stringer that Stinkum should run the territory. At the club, Orlando discusses business with D'Angelo. He tells him about Stinkum's promotion, which surprises D'Angelo. D'Angelo makes a date with dancer Shardene Innes.

Bubbles visits his friend Johnny in a clinic and learns that he has AIDS. Bubbles is upset at his friend's misfortune. Bubbles tells Johnny that he is on a mission to bring down the Barksdale hoppers that beat Johnny. Johnny cannot understand why Bubbles is voluntarily working with the police.

Stinkum, Avon, and D'Angelo visit Avon’s comatose brother in a county care facility. Avon sees his brother as an example of the dire consequences of acting carelessly in their way of life. Avon tells D’Angelo that one mistake could see either of them like his brother and that the fear motivates Avon to work harder.

Later, Poot and Wallace spot Brandon in an arcade and page D'Angelo to let him know. D'Angelo pages the news in from the project phones. Stringer meets with Wallace and Poot, along with Bird, Wee-Bey and Stinkum. He then calls D'Angelo to let him know the work is done. Although all the pages are logged by the computers at the detail office, nobody is watching the screens, so the calls themselves are not recorded.[1][2][3]