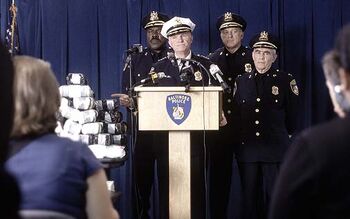 The episode is concerned with the aftermath of the shooting of Detective Kima Greggs. While Greggs' life hangs in the balance, Daniels is ordered to raid the Barksdale operation. The detail's hand is forced and a series of city-wide raids and arrests are made to appease the Commissioner's desire for "dope on the table". Bubbles unwittingly implicates himself in the shooting.

The title refers to the knee-jerk police effort to identify the shooter(s) of Detective Greggs.

"Dope on the damn table."
―Daniels

The epigraph refers to the commissioner's desire to seize drug dealers' assets in response to the shooting of a police officer, irrespective of how it will affect larger cases. The episode picture shows the results of this desire - a press conference with plenty of seized drugs to show off in a photo-op.

Homicide Major William Rawls and Sergeant Jay Landsman inspect the crime scene of the Shakima Greggs and Wendell "Orlando" Blocker shooting. Detectives Ray Cole and Ed Norris are the primary investigators. With an excessive number of officers crowding the scene, Rawls sharply orders all non-homicide personnel out of the immediate area. Bunk Moreland finds Greggs' pistol under the seat and realises it must have come unstuck and slid back too far for Greggs to reach it. Rawls examines the street sign that was deliberately turned the wrong way (and caused Greggs to misreport her position) and turns it back to its correct orientation.

Bunk finds some fresh footprints. Landsman and Bunk follow them to some discarded hoodies. They see the footprints disappear in the middle of the road and realise that the perpetrators got into a car; Bunk radios for a jackhammer to remove the section of road for evidence. DEA agents question Rawls about the money lost to Savino in the failed operation, but he dismisses them profanely. Rawls finds detective Jimmy McNulty covered in Greggs' blood and in a state of shock, and tells McNulty that Greggs' shooting was not his fault. He takes McNulty with him to the hospital where Greggs was sent. Detective Lester Freamon arrives at the scene and marshals the detail to get back to working the wiretap so any discussion of the shooting can be used as evidence. Lester also asks if anyone had contacted Kima's people. Ellis Carver goes to tell Kima's family what has happened and finds Cheryl at their apartment.

At the hospital Deputy Commissioner Warren Frazier finds Lieutenant Cedric Daniels being interviewed by Norris and goes on to see Greggs. The commissioner shakes Norris's hand mistaking him for Lieutenant Daniels. Detective Vernon Holley plays a tape of Greggs' last report. Major Raymond Foerster is distressed and McNulty vomits into a waste bin. Despite his hatred for McNulty, Rawls tells him in characteristic fashion that Greggs shooting is in no way his responsibility. Cheryl and Carver travel to the hospital and Burrell misunderstands Cheryl's relationship with Kima. Daniels tells him they are roommates and Burrell asks the commissioner if he wants to talk to her. He declines and Burrell is left to go alone. Carver is disappointed in the Commissioner for passing on the responsibility. Cheryl returns home and breaks down in tears.

Wee-Bey Brice and Little Man phone in a report on their completed mission. The next day Wee-Bey reports in to Stringer Bell. He tells him about the unexpected passenger and says he would have left her alive, but that Little Man killed her. Stringer already knows that Greggs was a cop and orders Wee-Bey to kill Little Man. He tells Wee-Bey that he might need to leave town if the police begin to close in.

At the Barksdale organization's territory in the low rise projects ("the pit"), D'Angelo Barksdale discusses the shooting with drug dealers Poot Carr and Bodie Broadus. They mistakenly believe that the shooting was unrelated to their organization and performed by local drug dealers. Later, when Wallace phones Poot to ask for money to come home, the call is marked non-pertinent, as Wallace's informant status is all but forgotten following the shootings.

Observing from a nearby church roof, Michael Santangelo and Thomas "Herc" Hauk watch Bodie receiving a resupply of narcotics from the tower buildings. Herc notes the window the stash is being dropped from. Wallace telephones Poot from the country, but is simply homesick and has little to say. Bodie and D'Angelo continue to discuss the situation. Bodie has noticed that Savino is wanted and that Little Man has disappeared. They realize the shooting must be tied to them. Bodie theorises that someone has made mistakes and Avon Barksdale will order their deaths.

D'Angelo receives an unexpected summons from Stringer. At Orlando's, Stringer orders D'Angelo to go with Wee-Bey. D'Angelo is afraid for his safety, as neither Wee-Bey nor Stringer will tell them where they are going. When they arrive at Wee-Bey's, he is certain he will be killed. Wee-Bey has actually brought him there to instruct him in how to feed his fish before Bey goes into hiding.

Meanwhile, warrants are served on all known addresses for Savino Bratton, the Barksdale lieutenant identified by Greggs before the shooting. Freamon and Roland "Prez" Pryzbylewski monitor traffic over the wiretap but there is nothing definitive. Checking the pages the night before, they find one made from a payphone in the area of the shooting to Stringer Bell twenty minutes after the incident. Freamon organizes crime scene technicians to meet him there and has them dust the payphone and a nearby discarded drink can for prints. At the detail office, McNulty arrives and begins drinking heavily. When Daniels arrives back at the office, he orders McNulty to stop drinking. McNulty admits that he would give back all of their work to make Greggs's shooting go away and tells Daniels the case was not worth it.

The homicide squad has a meeting to discuss the evidence collected so far. Bunk and Landsman suspect that it was either a street stick-up or a setup by the Barksdale organization. Cole reports that the autopsy on Orlando confirms the cause of death as shooting. Bunk confirms that the two types of shell casing found are from two different guns. Freamon arrives with the fingerprint report; it matches a known Barksdale enforcer from the 221 Franklin tower building: Little Man, full name Wintell Royce.

Bubbles pages Greggs. As yet unaware of the shooting, he is expecting to meet according to their plan to an apartment in order to help him stay clean. After Greggs's pager goes off, Bubbles is quickly picked up by two uniformed officers. At homicide, Detective Holley interrogates Bubbles assuming he is a suspect. Bubbles does not understand what is going on though and angers Holley who claims "You have exactly three seconds to explain yourself to me, asshole." When he fails to answer Holley’s question, the much larger detective begins beating on Bubbles who is handcuffed to the desk. Bubbles begs to talk to McNulty instead as Seargent Landsman restrains Holley from permanently injuring Bubbles. Landsman calls for McNulty to come clear the situation up, and as Jimmy comes upstairs, Holley lies that Bubbles had threatened him as for the reason of his beating. McNulty is snapped out of his shock by having to tell Bubbles what happened. He asks Bubbles to return to the Barksdale's territory and gives him money to buy drugs, not realising that he is trying to stay clean. Bubbles quickly gathers that Wee-Bey and Little Man are the likely shooters and reports in to McNulty, who passes the information on to Bunk. Bubbles again tries to tell McNulty he is clean but is cut off when McNulty has to leave. He is left holding the money McNulty gave him.

Next, McNulty meets with Barksdale attourney Maurice Levy with Assistant State's Attorney Rhonda Pearlman in tow. He insists that Levy hand over Savino by the afternoon and threatens to investigate his finances. Pearlman berates McNulty for forcing her to threaten Levy because he is a powerful figure in Baltimore law. McNulty, filled with self-righteous anger, tells her that if half of the ASA's were not aiming to be judges, then the police would be able to make far more convictions. Hurt, Pearlman tells him that she believes he will use anyone. Levy brings Savino in and manages the interview so that Savino will only be charged for an attempt to distribute false narcotics. He has a package of baking soda brought in and claims that Savino had planned to defraud Orlando and is not connected to the shooting.

Dope on the table

Burrell meets with Rawls, Foerster, and Daniels and tells them to organize citywide raids to seize as much drug product as possible. Burrell tells them they must let the city know who they are in the wake of Greggs's shooting. Daniels is skeptical of the message this will send. He meets with the detail to discuss possible locations for raids. He tells them they will not hit all of their targets as ordered, as this would jeopardize the wire. Freamon introduces Herc's find and they decide that this is the best opportunity to seize a sizable amount of drugs. They decide to hide the cutting house they recently discovered to protect their case. Later, Major Reed arrives and tells Daniels that they know he is withholding targets. The meeting descends into a shouting match and Reed walks out. Daniels tells Freamon and McNulty that Burrell must have an insider in the detail. McNulty visits Phelan at a campaign fundraiser to ask for his help with Burrell, but Phelan is reluctant. He has been reinstated on the ticket and does not want to upset other politicians by continuing to make waves, but he reluctantly agrees to intercede.

Raids are made against the cut house, Savino's home, and the tower. Carver and Herc are alone when they find a pile of cash and keep some for themselves. Vast quantities of guns, narcotics, and cash are seized and Commissioner Warren Frazier gets his photo opportunity. At the detail, work has all but ceased. No-one is on surveillance and Prez is monitoring light phone traffic. Greggs remains on life support at the hospital as the episode ends.[1][2] [3]