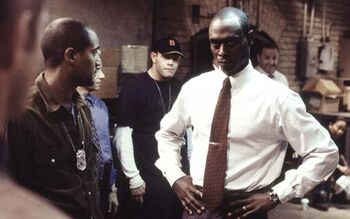 After a witness is killed, McNulty brings his concerns about the Barksdale Organization and the newly formed detail to Phelan. Daniels must deal with insubordinate, incompetent, and impulsive officers. D'Angelo is wracked by guilt.

The title refers to the newly formed Barksdale detail.

"You cannot lose if you do not play."
―Marla Daniels

Marla makes this wry remark after Daniels bemoans the politics of the Barksdale investigation. It may also refer to one's involvement in the drug trade. If one avoids narcotics trafficking or policing the drug trade, one avoids danger.

Detectives McNulty and Bunk visit Medical Examiner Randall Frazier at the Office of Chief Medical Examiner to view the body of state’s witness William Gant. McNulty is convinced that Gant was murdered by the Barksdale Organization to retaliate and discourage future witness testimony. A reticent Bunk wishes to conduct a through investigation before antagonizing their supervisors with claims of witness retaliation.

Lieutenant Daniels and Detectives Greggs, Carver, Hauk, and Santangelo arrive at the detail's office in the basement of the Clarence M. Mitchell, Jr. Courthouse.

McNulty informs Judge Phelan that a state's witness (Gant) from his presiding case was murdered. McNulty urges Phelan to pressure Deputy of Operations Burrell into expanding the investigation. Phelan refuses and instructs McNulty to convey the news to The Baltimore Sun. McNulty rebuts Phelan, believing press coverage would compromise the investigation, and reminds Phelan to not mention McNulty's visit to the Baltimore Police Department administration.

Detectives Patrick Mahon, Augustus Polk, Lester Freamon, and Roland "Prez" Pryzbylewski join the detail, irritating Daniels and McNulty. Pryzbylewski accidentally shoots the basement wall while demonstrating the light trigger pull of his service weapon to Carver. Prez tells Daniels he transferred from the Auto Theft Unit, then to "Casualty Section," and finally to the Barksdale detail.

Daniels visits Assistant State's Attorney Pearlman to criticize the detail's new members, and Pearlman reveals to Daniels why Pryzbylewski was transferred repeatedly. Pryzbylewski fired his service weapon into his vehicle and then filed a false report claiming he was shot at. The State's Attorney's Office intended to press charges until someone intervened on his behalf. Daniels observes that the assigned detectives are a message from administration to conduct an expeditious investigation. Daniels implores Pearlman to communicate his concerns to the State's Attorney's Office. Pearlman offers to inform her unit chief, a gesture she admits will be unhelpful.

Greggs, Herc, and Carver perform surveillance of Wee-Bey, Stinkum, and Little Man as Bubbles places a red wide-brim hat on each of them.

McNulty and Bunk arrive at The Pit to interrogate D'Angelo about Gant's murder. Bodie remarks that the murder of a state's witness is inevitable.

A Pit dealer alerts Wee-Bey and Stinkum to McNulty and Bunk's arrival. The two enforcers depart for The Pit as Greggs follows, leaving Carver and Herc to continue surveillance.

Daniels bemoans his detail assignments to Lieutenant Walter Cantrell who reveals that Prez is the son-in-law of Southeastern District Commander Stanislaus Valchek who has been protecting his career. Cantrell acquiesces to lending Daniels his best officer, Detective Leander Sydnor.

Burrell hosts a meeting in his office with Major Rawls, Major Foerster, and Daniels to discuss Judge Phelan's concern regarding Gant's murder. Everyone but Daniels believes that Gant's murder is unrelated to his testimony. Rawls offers to punish McNulty but Burrell counters that McNulty's removal is not an option as it will provoke Phelan into contacting the press.

Daniels arrives at the Homicide Unit with Greggs to rebuke McNulty for circumventing authority again. Daniels agrees he wants to conduct an effective investigation but instructs McNulty to remain communicative and include Greggs in D'Angelo's interrogation.

McNulty, Bunk, and Greggs exploit D'Angelo's feelings of guilt to convince him, using a photo of Bunk's children, that Gant was a devout family man whose death orphaned three children. D'Angelo writes a letter to the children expressing his sympathies. Legal counsel Maurice Levy arrives and berates D'Angelo.

The next day, Daniels assembles the detail to announce partner assignments. Detectives Greggs and Sydnor, and Herc and Carver will target drug dealers. Mahon and Polk will remain available to work specific leads. McNulty and Santangelo will review open homicide case files to manufacture a fresh prosecution. Pryzbylweski and Freamon will perform clerical duties in-office.

Avon and Stringer host a church community gathering. D'Angelo arrives with his partner, Donette, and his eleven-month-old son.

In the detail's office, Greggs and Bubbles label the surveillance photos of the Franklin Terrace dealers on a bulletin board. Bubbles claims that his cooperation is pro bono because of Johnny's beating, but an impressed McNulty gives him twenty dollars nonetheless.

Avon asks D'Angelo's about his arrest and admonishes him for writing the apology letter.

That night, an inebriated Herc, Carver and Prez arrive at Franklin Terrace. They begin searching the men they find there without provocation. Prez strikes Kevin Johnston, a young boy, in the head with his service weapon. Terrace residents begin to throw beer bottles and other household appliances at the trio.

The next morning, Bunk contacts McNulty to read the Sun. McNulty discovers a front-page article identifying William Gant as a murdered state's witness.

An infuriated Daniels arrives at the Terrace to discover Carver, Herc, and Pryzyblewski's service vehicle has been destroyed by fire. Daniels reveals that the mother of the young boy Prez hit is filing a formal police brutality charge with the Internal Investigations Division. Daniels instructs the trio to rehearse a version where they claim the Terrace residents initiated violence and Prez's attack was an act of self-defense.

At the courthouse, Phelan informs McNulty that he did not notify the Sun but merely provided a quote when contacted.

Marla Daniels criticizes her husband for protecting his three men and observes that the detail's investigation is an unwinnable career move.

That night, McNulty drinks, the dealers of The Pit rest, the dealers of the Terrace continue to traffic drugs, and Daniels is informed that the young boy Prez hit was permanently blinded in one eye.

Retrieved from "https://thewire.fandom.com/wiki/The_Detail?oldid=15265"
Community content is available under CC-BY-SA unless otherwise noted.