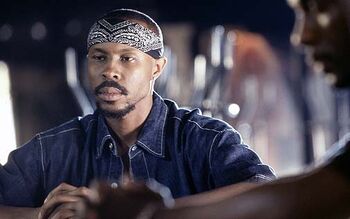 After being clean for three days, Bubbles gets some strong advice from a former addict. Avon and Stringer tighten up ship following Omar's attempted hit on Avon. The detail identifies a major Barksdale stash house and an undercover operation has terrible consequences. Omar and Stringer meet for a parlay.

The title refers to the Greggs's shooting, the cost of the detail's investigation into the Barksdale Organization.

"And then he dropped the bracelets..."
―Greggs

Greggs recounts the incident that made her realize she wanted to be a police officer: an incompetent fellow officer dropping the bracelets during an arrest.

Bubbles enjoys the clarity being clean brings him on a park bench. He meets with Walon, a Narcotics Anonymous sponsor. Walon gives Bubbles some frank advice.

Avon Barksdale and Stringer Bell meet with Wee-Bey Brice and tell him to contact Omar Little to negotiate a truce. Stringer convinces Avon to take a step back from the game and insulate himself further from his organization. Avon gives up his pager so that his subordinates will have to contact him through Stringer.

D'Angelo Barksdale ignores his girlfriend Donette as she plans out a home for them and their son. He walks out without giving her the money she is asking for. He waits for his new flame Shardene outside of Orlando's gentleman's club, but she refuses to talk to him.

Orlando is arrested by narcotics cops when he tries to buy cocaine from an undercover officer, Troy Wiggins. He gives them Avon's name to try and avoid his charge and the detail gets involved. When Orlando is transferred to county jail, he is identified by Marvin Browning, a Barksdale crew member serving time, who phones in Orlando's whereabouts. Levy visits Orlando, but only to take his name off of the club's liquor licence; now that he has a record, Avon is severing their ties.

Detective Jimmy McNulty visits Judge Phelan’s office and it seems the judge has lost his stomach for the investigation. After the meeting, ASA Rhonda Pearlman tells McNulty that Phelan is in a bad mood because he's off of the mayor's re-election ticket.

At the detail offices, Lester Freamon has mapped the Barksdale stash to a payphone in Pimlico. Every time a resupply is needed, they page the same number and the return call comes from the same payphone. Ellis Carver and Leander Sydnor are the only detectives available for surveillance of the phone as Herc is on a training course for the week.

Carver works the night shift at the Mondo mart. Sydnor takes over the next day. Detective Santangelo identifies Little Man using the tower phone and Sydnor soon finds the respondent at his phone. Freamon instructs Sydnor to follow the resupply man and he tracks him to a suburban house. He observes that the house is heavily fortified with security measures and video cameras. Later, at the office Freamon organizes Sydnor and Roland "Prez" Pryzbylewski to pose as garbage men so they can surreptitiously steal the bagged garbage in order to sift through it.

Lieutenant Daniels and Pearlman meet with Kima Greggs and McNulty to discuss the use of Orlando. Daniels suggests they could use him in a buy bust to move up the ladder. In a meeting with Deputy Commissioner Burrell and Major Foerster, Daniels makes a case for waiting, but Burrell insists they make a buy bust.

After working out that Wallace is tapping power from a vacant apartment, McNulty bribes Officer Bobby Brown and his partner with a crate of beer to wait on him at his home. Greggs pages McNulty and he goes to meet with her. Omar has contacted her and needs care for his shoulder wound.

Once Wallace is brought in, McNulty finds him ready to talk. He gives up Stringer, Wee-Bey, and several other tower soldiers in Brandon's murder. Daniels sits in on Wallace's interrogation. Afterwards, Pearlman discusses where Wallace can go until they need him for the trial. They decide he would be best placed with his grandmother on the Eastern shore, as there are no funds for protective custody. Later, Daniels drives Wallace to his new home and notices that he is in withdrawal.

McNulty discovers that his estranged wife Elena has organized an emergency hearing to limit his visitation rights. The judge dismisses the suggestion and asks them to deal with the problem themselves. McNulty tries to convince Elena that he loves his family. Elena reminds him that she has photographs of him meeting with Pearlman.

Kima goes out drinking with Cheryl and the two try to match each other. It seems Cheryl has as strong a stomach as Kima. One of their friends asks how Kima knew she wanted to be a cop, and she tells the story of an adrenaline-fueled arrest. Cheryl looks uncomfortable throughout, but when Kima acknowledges her misgivings, the two kiss.

Omar meets with Stringer in a busy public park through Proposition Joe's coordination. They discuss a truce and, despite Omar wearing a wire, the detectives come away with little new information. Bell does not deny a link to Brandon’s murder, but is quick to shield Avon’s name from the discussion. Omar asks for $5,000 for a retirement fund.

Wee-Bey, Avon, and Stringer discuss the meeting later and Shardene tries to listen in with little success. She reports in to Freamon and tells him that she finds it hard to see without her glasses on stage. They joke about her ugly spectacles.

Omar does not believe the truce is for real and boards a bus to New York. McNulty sees him off and asks him to keep in touch. Bubbles meets with Greggs and asks for her help getting a place to stay clean; she agrees to give him some money the following day.

With no other option, Daniels organizes a buy bust. Greggs is to be the undercover officer in the car, and in preparation she tapes a gun to the underside of the back seat in Orlando's car. Savino meets with Orlando and they drive to another location. Kima sits in the back. She slyly tries to give their location over a concealed radio, but Savino seems suspicious and turns up the radio louder and louder, causing the detail to lose track of the car. Savino exits the vehicle to bring the product. Kima is unsure of their location because the street signs have been moved around - a deliberate act by local hoods to confuse the police. Kima becomes suspicious when she believes she sees a couple of shadows moving nearby. Two men in hoodies move toward the car and Orlando is shot. Kima tries to reach for her gun, but cannot find it because it has slipped out of reach beneath the seat. She repeatedly calls a "Signal 13" (officer needs assistance) but her transmission disappears before the detail can find her. When they eventually find the vehicle with the police helicopter, Orlando is dead and Kima is severely wounded with gunshots to the neck and chest.[1][2][3]