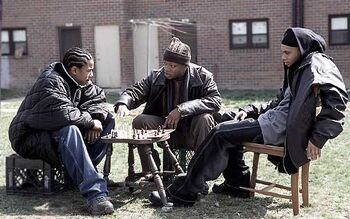 The Terrace incident stalls the detail's investigation. D'Angelo gives Wallace and Bodie a lesson about their place in the Barksdale hierarchy. Detective Freamon obtains a picture of Avon Barksdale. Stickup man Omar Little robs the narcotics stash in The Pit.

An undercover Detective Sydnor and Bubbles purchase narcotics from the Barksdale Organization. Valchek uses his political capital to buy Daniels's support of Pryzbylewski after his assault of Kevin Johnston.

"The king stay the king."
―D'Angelo

D'Angelo makes this observation to Bodie and Wallace while teaching them the rules of chess, alluding to the permanence of roles in the drug trade.

In the The Pit, D'Angelo, Bodie, Poot, and Wallace debate the necessity of violence in the drug trade. D'Angelo encourages his young dealers to treat the addicts with more respect. Bubbles approaches them and places the red wide-brim hat upon each of them as Detectives McNulty and Greggs take surveillance photographs.

Lieutenant Daniels attends a meeting with Deputy Commissioner Burrell, IID Commander Reed, and Southeastern District Commander Valchek to account for the actions of Daniels's three officers. Daniels suggests that Detective Pryzbylewski be relegated to clerical work. Valchek, Pryzbylewski's father-in-law, insists that this would be an admission of guilt. Reed, however, agrees that Pryzyblewski should remain on clerical duty until a grand jury acquits Pryzbylewski. After Reed and and Foerster leave, Burrell reveals that Valchek will provide two unmarked police cars and a surveillance van to the Barksdale detail in gratitude for Daniels's asssisstance to Pryzbylewski throughout the IID investigation. After Valchek departs, Burrell again reminds Daniels to conduct a three-week investigation comprised of felony arrests and drug seizures.

Major Rawls, Sergeant Landsman, and Detective Moreland speak at a police press conference. After Sun reporter William Zorzi inquires if William Gant was murdered because he was a State's witness, Rawls and Moreland both claim that they are investigating Gant's involvement in an unrelated physical altercation.

Detective McNulty asks Detectives Polk and Mahon to secure a photograph of Avon Barksdale from the housing department.

While waiting for a resupply of heroin and cocaine, D'Angelo observes Bodie and Wallace playing checkers on a chessboard. He teaches the two the game of chess using the analogy of the Barksdale organization: Avon as the king, Stringer as the queen, the stash as the rooks, and soldiers as pawns. When Bodie learns of the possibility of a pawn any other piece of the same color, he draws a comparison with himself. D'Angelo is skeptical and remarks that pawns are removed quickly from the game. Bodie insists that a smart pawn can be successful.

Detective Sydnor brings the outdated Nagras audio recorders to Detectives McNulty and Greggs, to the irritation of all. Sydnor says they need to meet with the FBI and Greggs agrees that Sydnor cannot go undercover with the provided equipment.

Detective Santangelo, Rawls's mole in the detail, asks Rawls to return him to Homicide Unit. Rawls assures Santangelo that he will be in Santangelo's debt if he continues to report on the detail.

That night at the detail's office, Daniels arrives and informs the detail that Prez is assigned to in-office duty only and that Detective Hauk is on medical leave until Monday. Polk and Mahon return with a photo of "Avon Barksdale", a middle-aged white man. Greggs bemoans how little they know about Barksdale after two weeks of investigation.

The next day, McNulty and Greggs visit Special Agent Fitzhugh to request lightweight wireless body microphones. Fitz promises to make the request with his squad supervisor but reacts ambiguously upon learned that Daniels is the detail's commanding officer.

At The Pit, Bodie guides drug addicts to pick up "testers", free vials of a new shipment of heroin to incentivize purchasing. Stickup men Omar Little, Brandon Wright, and John Bailey monitor the operation in the Pit and identify the stash house.

At the detail office, McNulty, Bubbles, and Greggs discuss their relationships. McNulty admits to being unfaithful, leading to his current separation from his now-vengeful wife, Elena.

That night at Orlando's, Stringer is impressed by the profit increase of The Pit under D'Angelo's supervision. D'Angelo suggests that the operation will become more profitable once they receive the new shipment of heroin and cocaine. Stringer reveals that they merely rebrand the resupply to increase profit. He adds that if they sell a low-strength heroin and cocaine, addicts will be forced to purchase more of it to satiate their addiction. As he departs, D'Angelo initiates conversation with Shardene. Although she does not remember their initial encounter, she is receptive to D'Angelo's advances.

Freamon returns with a poster featuring a picture of young Avon Barksdale. Detective Sydnor arrives, attired as a drug addict, but gets some advice from Bubbles on how to be more convincing. The next day, Sydnor and Bubbles purchase narcotics in The Pit as Greggs takes surveillance photographs. Sydnor notices that neither narcotics nor cash pass through the hands of the leaders. Omar and his crew continue to observe The Pit.

At the detail office, Greggs and McNulty discuss the results of their hand-to-hand arrests. Daniels reports that the commanding officers have insisted on arresting low-level dealers on Wednesday. McNulty leaves the office angry that the case is being pushed in the opposite direction he had hoped for.

That night, McNulty arrives at the residence of ASA Pearlman to inquire about cloning a pager. Pearlman reveals that he would need probable cause and to demonstrate exhaustion of other investigative techniques in order to get a signed affidavit from a judge. After he makes a sexual advance, she dryly observes that their relationship is less romantic than when he was married, but they sleep together nonetheless.

Tuesday: That night at The Pit, D'Angelo leaves to purchase food while Bodie serves as lookout during the re-up. Stinkum arrives to guard the shipment but Omar Little and his crew assault Stinkum and corral him, Bodie, and Poot, into the stash house. Omar instructs young dealer Sterling to reveal the location of the money. Sterling refuses and Omar shoots him in the kneecap. He then turns to another young dealer, who reveals that the money is located under the kitchen sink. Brandon grabs the money and accidentally uses Omar's name in front of the dealers. As the stickup men escape in their van, D'Angelo returns. Bubbles observes the entire robbery and reports back to Greggs.

Wednesday: The next day, Daniels readies the detail to storm McCulloh Homes in an effort to seize their heroin and cocaine supply. McNulty refuses to participate as he believes it will sabotage their case, and also refuses to sign off sick. Daniels is enraged at his insubordination. Herc arrives and insists on aiding the detail despite being placed on medical leave.

Wee-Bey berates D'Angelo for leaving during the resupply. Bodie relays Omar's name to Wee-Bey. The detail arrives to arrest low-level dealers. The dealers have changed stash houses, so the detail finds little evidence, though Freamon notices a number written on a wall. Detective Mahon is punched by Bodie, triggering detectives Carver and Greggs to assault him. Carver reports that a television news crew has offered to show their seizures. Daniels is disappointed when Kima observes that they have nothing to show.

That night in a parking lot, Fitzhugh reveals to McNulty that the FBI previously investigated Daniels regarding "integrity concerns". The FBI discovered hundreds of thousands in unexplained assets and turned their findings over to Burrell, who declined to investigate any further.

Retrieved from "https://thewire.fandom.com/wiki/The_Buys?oldid=15269"
Community content is available under CC-BY-SA unless otherwise noted.