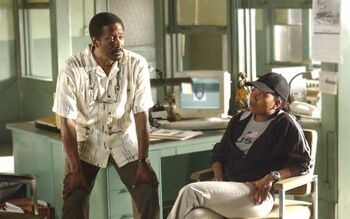 "Stray Rounds" is the ninth episode of the second season of The Wire. It premiered on July 27, 2003. The episode was written by David Simon and directed by Tim Van Patten.

"The world is a smaller place now."
―The Greek

The Greek makes this statement referring to telecommunication.

The detail are dismayed at the lack of activity from their subjects and realize that they must be changing their operating procedure. The team decide they need to track a new number for the target they just identified before the smuggling ring changed up. Lieutenant Cedric Daniels assigns Thomas "Herc" Hauk and Ellis Carver to watch the warehouse while Freamon, Pryzbylewski, Bunk Moreland and Russell man their remaining wiretaps.

McNulty continues to try to infiltrate the Greek's brothel and has more success when taking Freamon's advice to pose as a client from outside of America. He uses a badly faked English accent and manages to book a visit. McNulty visits Fitz and apologizes for his actions last time they met. Fitz helps him to look up Double G. Fitz finds that Glekas’ file has been sealed by an agent Koutris. Koutris tells Fitz there is little to the file they are holding. Once the call is finished Koutris phones Vondas to let him know other agents are looking into Glekas.

At the office Freamon notices a container going missing and asks Carver to watch what happens with it as he is already out on surveillance at the Greek's warehouse. Carver reports the truck’s arrival while Eton Ben-Eleazer orders one of his men to check the number plates of cars near the warehouse to check if the police are nearby.

Nick Sobotka meets with Vondas to discuss their business. Vondas puts Nick in touch with Michael "White Mike" McArdle to supply him with his drugs from now on. Vondas gives Nick a new list of clean containers to disappear.

Vondas discusses the smuggling business with Eton and they agree to move more drugs. Later, The Greek has dinner with Vondas, Eton, and Ilona Petrovna.

Bodie Broadus’ crew face the repercussions of beating another crew of dealers to get them off of their turf when they come back with guns. In the ensuing gunfight a young boy is killed by a stray bullet from his bedroom window.

Colonel William Rawls welcomes Major Howard "Bunny" Colvin and Lieutenant Dennis Mello to the scene of the shooting. Rawls is angry that they are late claiming that "It used to be when a nine year old kid hit the pavement, the district commander would be there within minutes" while Colvin explains that Burrell had taken him to DC with other district commanders to attend a seminar. Ed Norris is the lead investigator from homicide. Rawls asks Colvin to have Western and tactical arrest as many dealers as possible while his men work the case.

Bodie reports the gunfight to Stringer Bell; Stringer is angry that their trade will be disrupted by the boy's death. Stringer tells Bodie that their business revolves around more than violence, territory and reputations and that Bodie needs to show some flexibility and intelligence also. Shamrock drives Bodie to dispose of the weapons, Bodie wipes them clean as they travel and throws them over the side of the Hanover Street bridge near the harbor. The bag of guns lands on a passing boat though and is later picked up by city police.

Colvin's district makes large scale strike operations against drug dealers and numerous arrests. The SWAT Team leader has tactical arrest everyone in the pit on suspicion of murdering the young child due to the drug trade associated in the projects. Mello comments that they waited too long to do this and Colvin asks him what it is they think they are doing.

Sergeant Jay Landsman discusses the case with Ray Cole and Norris. They have had witnesses mention Bodie. Norris and Cole later bring Bodie in, having recovered the guns he failed to adequately dispose of. They present him with the weapons Cole tells him they have matched his prints to a weapon. Bodie asks which one and Cole picks the wrong weapon. Knowing that he is not in as much trouble as they say he is Bodie again asks for his lawyer.

Stringer meets with Proposition Joe to discuss co-operating over sharing product and territory. Proposition Joe is worried that Avon Barksdale might not be so keen to share his territory. Stringer suggests than when Avon sees how much money his organization will make from co-operating with Joe's, he'll come round, but sounds far from convinced.

Stringer asks Brianna Barksdale to talk to Avon about the deal he has made with Proposition Joe. He says that with their weak product and lack of muscle they're out of options. Brianna soon reports back that Avon is still adamantly against co-operating with Proposition Joe. Avon told Brianna to assure Stringer that he's working on getting a new supply and is bringing in muscle from New York, named Brother Mouzone, to help fight off rival dealers.

Disturbed, Stringer takes this news to Proposition Joe who is even more concerned. Stringer assures Joe that their deal is still on, but insists they work together to deal with Brother Mouzone. Joe refuses to send any of his people up against Brother Mouzone realizing his reputation as a feared hitman.

Ziggy drinks with Johnny Fifty and expresses a desire to get out of the drug business, despite having been involved for over a year. Nick arrives later and Ziggy, very drunk and distraught, tries to start a fight with him. Nick refuses to rise to Ziggy, then finds out in the bar why Ziggy was so upset. Ziggy had accidentally killed his pet duck-he gave the duck hard liquor, and it died of alcohol poisoning in the bar.

Ziggy meets with Glekas and offers him stolen cars from the docks to sell abroad. Glekas is initially reluctant but agrees to give Ziggy a chance. Ziggy plans to create a track across the grass and a hole in the fence to take the cars through, Johnny Fifty questions why they need to when they could take the cars out of the front.[1][2][3]

Retrieved from "https://thewire.fandom.com/wiki/Stray_Rounds?oldid=13590"
Community content is available under CC-BY-SA unless otherwise noted.