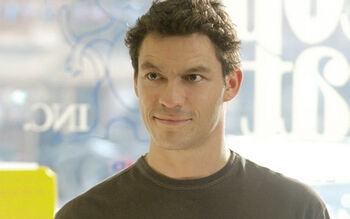 "Straight and True" is the fifth episode of the third season of The Wire.  It is the thirtieth episode of the series overall. It premiered on October 17, 2004. The episode was written by Ed Burns and directed by Dan Attias.

The title refers to Cutty's choice between going straight and returning to his old life as a soldier as well as Stringer's attempts to pose as a legitimate business man.

"I had such fuckin' hopes for us."
―McNulty

McNulty makes this statement expressing his disappointment at losing a worthy target after approaching Stringer and finding that he is now mostly straight.

Bubbles and Johnny Weeks argue about the morality of acting as a Confidential Information to make money as opposed to getting out of trouble with the police. Johnny persuades Bubbles to run a short con with him to make money instead of reporting to Detective Greggs. Once Johnny has the money, however, Bubbles leaves.

Councilman Carcetti mentions a story in the paper to Councilman Gray. A state's witness has been murdered in a high profile case. Carcetti believes that something should be done as the killing sends a clear message that the system in Baltimore is not working. He tells Gray he will try to fix it politics aside but Gray remains skeptical.

Carcetti brings the issue to Mayor Royce and Chief of Staff Coleman Parker. Royce promises Carcetti that he will act quickly, Carcetti asks to be kept in the loop. later Carcetti discusses the meeting over a squash game with Gray. He tells Gray that he is going to go after Royce if he keeps ducking them.

At his next committee meeting with Acting Commissioner Ervin Burrell and Deputy Commissioner William Rawls Carcetti questions them about the dead witness. Rawls tells him they have a homicide task force and narcotics officers working the case as well as turning to the FBI and DEA for support. Gray criticizes the effort as too little too late asking why witnesses are not offered any protection.

At the weekly ComStat meeting, Rawls and Burrell target the Auto Theft Unit and chastise them for operating during the day when most cars are stolen at night. Rawls asks Colonel Raymond Foerster about Officer Dozerman's missing service weapon.

William Moreland canvasses for witnesses in the shooting of Tosha and Tank. He gets confirmation that Omar was present from a witness named Bruiser. Sergeant Landsman catches Bunk working on the murder case when he is supposed to be looking for Dozerman's weapon and prevents him from bringing in Brusier for a statement. Landsman has requests from some arrested drug dealers to exchange information about the weapon for leniency. When Bunk interviews them he finds nothing but time wasters and chancers.

Major Colvin's subordinates offer him sympathy for the failure of his initiative to get drug trade off the streets using tolerant zones. Colvin rejects Sergeant Carver's plan to create a flex squad and put more pressure on the dealers, writing it off as more of the same.

Following the comstat meeting Colvin comes up with a new plan - instead of contacting the low level hoppers he needs to coerce the dealers and crew chiefs into following his new rules. He asks Carver for a list of names of all the mid-level dealers on his corners. Carver is unable to offer anything and Colvin is once more disappointed in him. Colvin is forced to go to Major George Smith - the CID Narcotics Unit commander who has replaced Foerster. He finds Smith's records a disappointingly slim collection of rap sheets. Smith tells him there is no one looking at high end drug cases because Rawls is directing their efforts to street work. Colvin is also unable to find anything from the Intelligence Division adding more to his disappointment. Eventually Colvin is referred to the Major Crimes Unit where Lieutenant Daniels and Detectives Greggs and Lester Freamon are able to give him a wealth of information. Colvin is glad and surprised that a unit as small as theirs is the only group of police in the department who have every file that he is looking for. McNulty arrives and receives a warm greeting from Colvin, his old commander, who still calls him Bushy Top.

With this new intelligence Colvin calls a meeting of his district and orders them to bring in the drug lieutenants using their cars instead of wagons. Carver questions why Colvin feels he will have more success with these dealers having failed to persuade the street dealers. Colvin tells them he can sympathise with their position as middle management. Carver and Herc are tasked with bringing in Marlo, they find him surrounded by soldiers and refusing to move. Herc is unfazed, but Carver realizes the danger they are in. Greggs observes the DEU detectives’ actions from a vacant apartment. Carver calls Herc off, and as they leave, Greggs photographs Marlo. Meanwhile, Officer Colicchio has picked up Bodie.

With the lieutenants assembled, Colvin delivers his speech explaining the new regime. Bodie and the others are skeptical, fearing a trap, and Colvin tries to reassure them. Bodie asks what happens if they refuse to comply, and Colvin warns them that he will come down hard on them. As the meeting ends, Colvin spots a lone resident in his prospective tolerant zone.

Herc, Carver and Colicchio staff the "Hamsterdam" tolerant zone at the top of Vincent street and a few crews of drug dealers arrive. One of the crews complain that there are no customers. Herc objects to rounding up drug addicts for the dealers and Carver pulls rank on him. Herc and Colicchio pick up Johnny and hand him over to Officer Santangelo for transport to Hamsterdam. Johnny cannot understand the situation when he arrives.

Cutty is awoken by Mee-Maw, his grandmother, who asks why he is not working today. He lies to her, saying that he has a job at a bar and will now be working nights. She also tells him that Grace called to remind him of his appointment with The Deacon.

Cutty returns to work, checking on the drug dealer Slim Charles suspects of stealing from them. He is accompanied by Gerard and Sapper. They find the dealer with his girlfriend, whom Cutty believes is the most likely outlet for his stolen money. Cutty leaves their work to meet with the deacon. The deacon questions Cutty's commitment and tells him that he will have to work to find a job but that he can help him get into a GED program. Cutty tells the deacon that this was not what he expected and then leaves the church. When Cutty returns to the car, Gerard and Sapper are taking cocaine. Cutty worries about having to give a urine sample the following day. Sapper tells him that they have it covered.

Later, Sapper and Gerard take Cutty to an old man who sells clean urine taken from a daycare center. Cutty buys a bottle and takes it to the parole office where he is required to give a urine sample. Back out on the street, Sapper and Gerard try to talk to the stealing dealer’s girlfriend. She gives them nothing but mouth until Cutty steps in and slaps her. Cutty then tells her that she needs to talk. When they catch up to the dealer, Gerard and Sapper severely beat him. Cutty interrupts them, telling them that if they keep beating him there will be no way to make him work off what he owes. Gerard pulls out a baseball bat as the injured dealer tries to crawl away and hits the dealer a final time, knocking him unconscious before searching for remaining items on his limp body.

Stringer Bell chairs a meeting of high-level drug dealers in a hotel conference room. Also in attendance are Proposition Joe, Kintell Williamson, and Fat Face Rick (representing the Veronica Avenue dealers). Afterwards he finds Shamrock taking minutes and quickly reminds him that no matter how organized, they are still participating in a criminal conspiracy. Later, he picks up the newly-paroled Avon Barksdale with a gift of new clothes.

Bodie reports his meeting with Major Colvin directly to Stringer. Stringer first chastises Bodie for going around the proper channels of reaching him, but Bodie says he was worried that only Stringer would consider the proposition. He tells Stringer that he was picked up with other Barksdale lieutenants, including Tucky and Little Mikey. Stringer assumes that Bodie is wearing a wire until he shows him otherwise. Bodie reminds Stringer of his problems with Marlo.

After meeting with Marlo and failing to reach any compromise, Stringer attends Avon's welcome-home party. Avon is greeted by Slim Charles, Country, and Brianna. Prop Joe is also in attendance. Avon is left on the outside as Stringer talks business. Stringer pulls Avon away to talk business with Maurice Levy, R. Clayton Davis, and Andy Krawczyk, their developer. Avon spots Gerard and Sapper coming into the party high and orders Slim Charles to throw them out. Stringer once more pulls Avon away to show him his new apartment. Stringer tells him they have enough legitimate money to put whatever they like out in the open and in their own names now. Stringer leaves Avon asking once more about women, but he returns soon afterward with the girl Avon had noticed at the party and another.

Greggs meets with Bubbles and he tells her more about Marlo Stanfield's organization. He names Christopher Partlow as Marlo's chief bodyguard. Cheryl calls but Greggs does not answer. Bubbles gives Greggs a disposable cell phone, known as a "burner", that was used by Stanfield dealer Fruit.

James McNulty continues to follow Stringer Bell, tailing him from his college class to a meeting at his under-development apartment building. Eventually he gets tired of following Stringer and approaches him in his photocopying shop. Stringer gives McNulty his card and brazenly offers him a condominium in his development. McNulty tells Stringer that he is disappointed, as he had high hopes for their continuing game of cat and mouse.

When McNulty returns to the office, Freamon tells him that he has had a week to look into Stringer and asks if he has anything. McNulty tells Pryzbylewski and Freamon that Stringer has become "the bank" - working legitimate businesses to produce funds to buy packages of narcotics for distribution that he will never touch. McNulty asks about progress in the Kintell Williamson case and learns that they have DNRs on some payphones. McNulty spends time with his sons Michael and Sean and asks about Elena's new boyfriend. They remind him about an open evening for a new school.

Greggs tracks Marlo down using Bubbles’ information and organizes support to tail him. She finds Stringer visiting Marlo at his headquarters and calls in more support. McNulty joins her later and asks what is going on. Inside, Stringer discusses the co-op and its potential usefulness to Marlo, particularly in laundering his drug money. Marlo remains silent throughout his speech, and when Stringer leaves, Marlo tells Partlow to organize weapons for their people. McNulty is dubious of Greggs’ surveillance until Stringer emerges. Then he is suitably impressed.

McNulty attends the school open evening. He arrives late and finds Elena talking class sizes. He gravitates to the buffet table where he finds Theresa D'Agostino doing fundraising work. The two flirt and end up spending the night together. After they make love, Terri is dismissive and rejects McNulty's further advances.

Omar Little and his crew prepare weapons for their next heist. Tension is still high in the group following Dante's accidental shooting of Tosha. Dante is annoyed that he has been given a peripheral role and Kimmy is confrontational. Omar warns them that they must get along or leave the crew.[1][2]