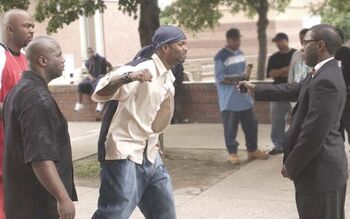 "Storm Warnings" is the tenth episode of the second season of The Wire. It is the twenty-third episode overall. It premiered on August 10, 2003. The episode was written by Ed Burns and directed by Rob Bailey.

The title refers to the warnings sent out before a major weather event occurs, usually a thunderstorm. Metaphorically the title represents the episodes foreshadowing of approaching danger.

"It pays to go with the union card every time."
―Ziggy

Ziggy makes this comment as a joke to John Spamanto as they steal cars from the docks.

Racial tension over the next union secretary continues to build. Frank Sobotka plans to run again despite an earlier agreement that Ott would be next to hold the position. Ott realizes Sobotka's intentions and calls him up on them.

Ziggy and Johnny Fifty steal several cars from the docks and fake an exit through the fence to draw attention away from it being an inside job. Ziggy plans to fence the cars to The Greek's man George "Double G" Glekas. Ziggy later reports in to Glekas to tell him the cars have been put into containers. Glekas cuts Ziggy's share from 20% to 10% and Ziggy flies into a rage and insults Glekas. Glekas beats Ziggy and throws him out of the warehouse. Ziggy makes his way to his car and returns to the warehouse with a gun. He shoots Glekas several times and hits one of his employees in the abdomen. He leaves his cut with the wounded employee and breaks down in his car in front of the warehouse.

Ziggy is next seen in the interrogation room with homicide sergeant Jay Landsman. Landsman gives Ziggy a confession to sign and Ziggy does so after making a single change - Double G begged him "don't shoot" rather than said it.

Nickolas Sobotka is questioned by his girlfriend Aimee about the sums of cash she found hidden in his room. He tells her that he is being paid off the books by the Greek for working in a warehouse and is bringing home more than he expected. When news of Ziggy's actions reaches Nick he reports it straight back to Frank. Frank is angry that Nick didn't know what Ziggy was doing with the Greeks. Nick drowns his sorrows in a local park and is found there by Prissy, an ex of Ziggy's. They discuss Ziggy's history of foolish actions. Nick grieves for his cousin's freedom and damns his name.

"Prez" Pryzbylewski survey's the detail's work to date and is pleased with the information they have collected. The detail meet to discuss the direction their case is taking - they are supplementing the wire tap with satellite surveillance of their suspects vehicles.

Meanwhile Major Valchek has become disillusioned with their shift of focus away from Sobotka and has called in the FBI to take over the case. He hands them all the details information so far and also engages them to try to recover his surveillance van.

Thomas "Herc" Hauk and Ellis Carver deliver some heavy computer equipment to the detail office. They again feel that they are second class citizens in the detail as they are assigned mostly surveillance tasks. As they leave the office Valchek's FBI agents arrive. Lieutenant Cedric Daniels and ASA Rhonda Pearlman later meet with the FBI and agree to share the case with them. The bureau's condition is that the focus is on the union. When the agents arrive at the detail office, led by Terrance "Fitz" Fitzhugh, they are greeted with a Western style standoff from Bunk Moreland and Lester Freamon that soon evaporates into friendly greetings. Herc and Carver are relieved from their surveillance by a pair of FBI agents.

Bunk later accompanies James McNulty and Claude Diggins on a fishing trip to disguise their surveillance. Shakima Greggs and Cheryl argue a little about the division of the shopping for their household. Cheryl asks Kima to feel her pregnant abdomen because her baby is moving. Back at the detail Kima questions Beatrice Russell about balancing her role as a police officer with being a mother. In particular Kima feels she would miss being involved in raids with her fellow officers.

Daniels and Freamon meet with Fitz and discuss their aims - the FBI agents offer to help to trace the origin of the contraband containers. Valchek arrives at the detail and lays into Daniels for his failure to deliver a case on Sobotka. He insists that Prez leave the detail as he will not let Daniels use his own people against him. Prez refuses to go and when Valchek insults him he lashes out and punches him. Valchek is outraged and leaves immediately. Prez hands Daniels his gun and walks into his office as ordered.

As soon as Fitz logs the investigation into the FBI computers the Greek's inside man in the bureau, Agent Koutris, notices and phones it in. Koutris meets with The Greek and tells him how the investigation is monitoring him. Spiros immediately asks Stephanos, the short order cook at the diner, to contact Eton Ben-Eleazer and organize a meeting insisting they avoid using phones.

Eton reports Ziggy's actions to Vondas and tells him that both men died. Vondas orders Eton to clean out the store and warehouse. The meeting is observed by Bunk and McNulty from Diggins boat. Vondas orders Eton to dispose of all his phones and then throws his own phone into the water. Meanwhile, Herc and Carver observe Nick arriving at the Greek's cafe. Nick asks to speak with Spiros and is met with blanket denial of his existence.

Back at the office Freamon, Bunk and McNulty discuss Prez's action. McNulty also asks about text messaging and the possibility of tracing a message for a phone number. McNulty is disappointed when Fitz tells him it would be near impossible without knowing the wireless provider along with the time and location of the call. Despite their protestations Fitz and Bunk do trace the call using FBI technology and subpoena the billing information from the service provider. At the phone company offices an employee tells them that with a search warrant they could have two months of text messaging history. Fitz talks the clerk into allowing them a peek at the records before they produce the warrant and is dismayed when the messages are all written in Greek. At the detail Daniels, McNulty and Greggs look on as an agent translates Vondas' final message (ΚΛΕΙΣΤΟ ΑΜΕΣΟΣ) - it reads "shut down immediately".

Greggs calls Beadie to let her know they are raiding that night to catch what they can. Freamon types warrants as Sergei "Serge" Malatov and Eton clean house.

Bodie is pleased with the new package which is finally selling well. He orders a resupply from Mo Man via his subordinate Puddin'. Stringer Bell arrives and is followed by Melvin "Cheese" Wagstaff from Proposition Joe's organization. Stringer tells Bodie that Cheese will be taking over three of the six towers, Bodie doesn't understand why they are giving up their territory and Stringer tells him to consider where their new package came from. Bodie quickly adapts to the new circumstances by stealing a sale from Cheese's hoppers by undercutting their prices. The buyer is Bubbles. Cheese is not that put out by Bodie's actions and the two banter back and forth.

However, Cheese is put out when a man who dreses like a member of the Nation of Islam approaches him and tells him to move on if he doesn't work for Avon Barksdale. Cheese first responds insulting Brother Mouzone for being overly dressed and suggests he leave and sell bean pies. Mouzone then tells him to leave in a more threatening manner and when Cheese goes to punch him, Mouzone shoots Cheese in the arm with a round of rat shot warning him that the next round will be a real bullet. Cheese is sufficiently intimidated to move on.

Cheese discusses the problem with his uncle Proposition Joe. Cheese wants to retaliate but Joe knows of the man who shot Cheese - Brother Mouzone - and his reputation. He decides it would be too dangerous to retaliate or even put a contract out on Mouzone as Mouzone would come after him directly in response. Joe realizes that Avon must have contracted Mouzone to protect his territory and that Stringer cannot act as he would be going against Avon a second time. He suggests to Cheese that there is only one person who could take on Brother Mouzone in Baltimore but he does not take contract money.

Omar Little visits Butchie and drops off his latest take - Butchie acts as a bank and advisor for Omar. Later, Proposition Joe meets with Butchie and convinces him to broker a meeting between Stringer and Omar to discuss Brother Mouzone. Butchie is suspicious but agrees as long as his nephew Heywood can provide security.

At the towers Brother Mouzone keeps watch and chastises his subordinate Lamar for forgetting one of his magazines. Bodie and Shamrock observe Mouzone's vigil and Shamrock is impressed that his reputation alone is holding away the East side drug dealers. Bodie wonders what will happen when they run out of good product. Shamrock insists that if Stringer wanted to cooperate with the East side dealers Mouzone would not be there.[1][2][3]