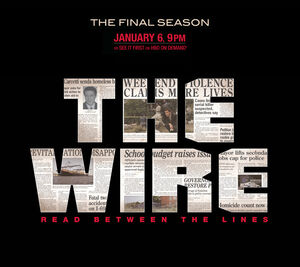 The fifth season of the American television drama series The Wire premiered on January 6, 2008 and concluded on March 9, 2008. It consisted of ten episodes, each running approximately 55-93 minutes in length. It follows the newsroom of The Baltimore Sun and examines the continued failure of the city to recognize its own problems.

Fifteen months after December 2006, Thomas Carcetti's cuts in the police budget to redress the education deficit force the Stanfield Organization investigation to shut down. Cedric Daniels secures a detail to focus on the prosecution of R. Clayton Davis for corruption. James McNulty returns to the Homicide Unit and decides to divert resources back to the police department by faking evidence to make it appear that a serial killer is murdering homeless men.

The Baltimore Sun also faces budget cuts and the newsroom struggles to adequately cover the city, omitting many important stories. Ervin Burrell continues to falsify crime statistics and is fired by Carcetti, who positions Daniels to replace him.

Proposition Joe teaches Marlo Stanfield how to launder money and evade investigation. Once Joe is no longer useful to him, Stanfield has Joe killed and usurps his position with the Greeks and the New Day Co-Op. Stanfield lures his enemy Omar Devon Little out of retirement by having Omar's mentor Butchie murdered. Michael Lee continues working as a Stanfield enforcer, providing a home for his friend Duquan Weems and younger brother Aaron Manigault.

Omar returns to Baltimore seeking revenge, targeting Stanfield's organization, stealing and destroying money and drugs and killing Stanfield enforcers in an attempt to force Stanfield into the open. However, he is eventually shot and killed by Kenard, a young Stanfield dealer.

Templeton claims to have been contacted by McNulty's fake serial killer. City Editor Augustus Haynes becomes suspicious, but his superiors are enamored of Templeton. The story gains momentum and Carcetti spins the resulting attention on homelessness into a key issue in his imminent campaign for Governor and restores funding to the police department.

Bubbles is recovering from his drug addiction while living in his sister's basement. He is befriended by Sun reporter Michael Fletcher, who eventually writes a profile of Bubbles.

Bunk is disgusted with McNulty's serial killer scheme and tries to have Lester Freamon reason with McNulty. Instead, Freamon helps McNulty perpetuate the lie and uses the funds for an illegal wiretap on Stanfield. Bunk resumes working the vacant house murders, leading to a murder warrant against Partlow for killing Michael's stepfather.

Freamon and Leander Sydnor gather enough evidence to arrest Stanfield and most of his top lieutenants, seizing a large quantity of drugs. Stanfield suspects that Michael is an informant, and orders him killed. Michael realizes he is being set up and kills Snoop instead. A wanted man, he leaves Bug with an Aunt and begins a career as a stick-up man. With his support system gone, Dukie lives with drug addicts.

McNulty tells Shakima Greggs about his fabrications to prevent her wasting time on the case. Greggs tells Daniels, who, along with Rhonda Pearlman, takes this news to Carcetti, who orders a cover-up because of the issue's importance to his campaign.

Davis is acquitted, but Freamon uses the threat of federal prosecution to blackmail him for information. Davis reveals Levy has a mole in the courthouse from whom he illegally purchases copies of sealed indictments. Herc tells Levy that the Stanfield case was probably based on an illegal wiretap, something which would jeopardize the entire case. After Levy reveals this to Pearlman, she uses Levy's espionage to blackmail him into agreeing to a plea bargain for his defendants. Levy ensures Stanfield's release on the condition that he permanently retires, while his subordinates will have to accept long sentences. Stanfield sells the connection to The Greeks back to the Co-Op and plans to become a businessman, though indications are that ultimately he will not be able to resist the lure of the corner.

As the cover-up begins, a copy-cat killing occurs, but McNulty quickly identifies and arrests the culprit. Pearlman tells McNulty and Freamon that they can no longer be allowed to do investigative work and warns of criminal charges if the scandal becomes public. They opt to retire. Haynes attempts to expose Templeton but the managing editors ignore the fabrications and demote anyone critical of their star reporter. Carcetti pressures Daniels to falsify crime statistics to aid his campaign. Daniels refuses and then quietly resigns rather than have his FBI file leaked.

In a final montage, McNulty gazes over the city; Freamon enjoys retirement; Templeton wins a Pulitzer; Carcetti becomes Governor; Haynes is sidelined to the copy desk and replaced by Fletcher; Campbell appoints Valchek as commissioner; Carcetti appoints Rawls as Superintendent of the Maryland State Police; Dukie continues to use heroin; Michael becomes a stickup boy; Pearlman becomes a judge and Daniels a defense attorney; Bubbles is allowed upstairs where he enjoys a family dinner; Chris serves his life sentence alongside Roland Brice; the drug trade continues; and the people of Baltimore go on with their lives.

HBO announced on September 12, 2006 that it had commissioned a fifth and final season consisting of thirteen episodes,[1][2] which was later reduced to ten.[3] On April 30, 2007, production for Season 5 officially began. Filming wrapped early in the morning of September 1, 2007.[4]

On October 28, 2007, HBO aired a preview of the fifth season featuring interviews with Lance Reddick, Tom McCarthy, David Simon, Clark Johnson, John Doman, Seth Gilliam, Wendell Pierce and Dominic West and footage from the fifth season. Reddick introduced the idea of the fifth season being about the media. McCarthy stated that it examines how the media "reflects, informs and manipulates". Simon observed that "the more graphic our crime, the more we like it, the more we pay attention. There is a little bit of a mockery of that in what we've constructed for season five". Johnson noted that newsroom storyline is fascinating and "a great way to end the series". Doman warned viewers to expect "complexities and complications". Gilliam says that there is "creativity" in how people approach their jobs. Pierce noted that all the characters have to make choices. West revealed that McNulty goes outside the system due to his lack of faith in his superiors. Simon concluded by saying that the season is really about "just how far you can go on a lie". The footage included scenes of Greggs being quizzed by reporters; reporters reflecting on why crime in certain areas is not covered; low morale in the police department; Carver briefing Western district officers; McNulty drinking; William Moreland refusing to get involved with something and Fitz telling McNulty that "you guys are shut out across the board".[5]

Several ex-Baltimore Sun reporters appeared in the season.[6] Rebecca Corbett who was Simon's former editor at the Baltimore Sun and now works at the New York Times had a recurring role.[6] Writer and former political reporter William F. Zorzi returend after a Season 1 cameo.[6] Steve Luxenberg, the editor responsible for hiring Simon at The Sun had a role.[6] Simon's wife Laura Lippman also appeared as herself.[6]

In an interview with Slate on December 1, 2006, David Simon said that Season 5 is about media and media consumption.[2] A major focus would be journalism, which would be dramatized through a newspaper modeled after The Baltimore Sun. The theme, according to Simon, would deal with "what stories get told and what don't and why it is that things stay the same."[2] Issues such as the quest for profit, the decrease in the number of reporters, and the end of aspiration for news quality would all be addressed, alongside the theme of homelessness. In the same interview, Simon indicated that no other theme seemed substantial enough to warrant a sixth season, except possibly the large influx of Hispanic peoples into Baltimore. He noted, however, that since no writer on the show spoke Spanish or had any intimate knowledge of the city's Latino population, the field work would be too cumbersome.[2] He also hinted that Mayor Carcetti might make a run for governor, continuing to mirror the current Maryland governor and former Baltimore mayor, Martin O'Malley.

The season continued the series's examination of the devaluing of human life and institutional dysfunction.[6] The increased scope of the season to include the media will allow this theme to be explored through an examination of "the people who are supposed to be monitoring all this and sounding the alarm — the journalists."[6] In particular Simon spoke about the devaluing of the reporter in terms of downsizing a newspaper staff and the management expecting to do "more with less" when he asserts that in reality, you can only do "less with less".[6]

Locations At that Night at the Wire event, fans were allowed to tour the Baltimore Sun newsroom constructed for the show. The real newspaper allowed the show to use their name but stipulated that no current employees could appear in the series.[6] The newsroom was an entirely built set constructed at the show's out of town soundstage.[6]

The actual Washington Post newsroom will also feature as one reporter visits for an interview.[18] The Wire is the first production to be allowed to film at the location, even the film All The President's Men about the papers role in breaking the Watergate scandal had to build a set to represent the paper.[18] Creator David Simon has previously remarked that he was inspired to enter journalism himself by the work of the Post on that story.[19]