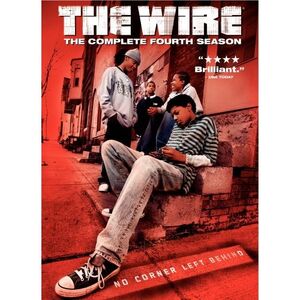 The fourth season of the American television drama series The Wire premiered on September 10, 2006 and concluded on December 10, 2006. It consisted of thirteen episodes, each running approximately 55-78 minutes in length. The fourth season focused on the educational system in Baltimore, while continuing to follow the 2006 mayoral race, the rise of the Stanfield Organization in West Baltimore, and the ongoing efforts of the Baltimore Police Department.

The show introduces Dukie, Randy, Michael, and Namond, four boys from West Baltimore, as they enter the eighth grade. At the same school, Prez has begun a new career as a math teacher. ("Boys of Summer") Despite mentorship from the more seasoned faculty, ("Soft Eyes") Prez has difficulties maintaining order and keeping his students focused in the chaotic and sometimes violent classroom. ("Home Rooms") Namond, and later Michael, work as drugrunners for Bodie, who has had middling success selling Proposition Joe's product independently. ("Soft Eyes")

The cold-blooded Marlo has come to dominate the streets of the west side, using murder and intimidation to make up for his weak-quality drugs and lack of business acumen. His enforcers Christopher Partlow and Felicia Pearson conceal their numerous victims in boarded-up row houses where the bodies will not be readily discovered. ("Soft Eyes") The disappearances of so many known criminals come to mystify both the major crimes unit investigating Marlo and the homicide unit assigned to solve the presumed murders. Marlo coerces Bodie into working under him, ("Refugees") and attempts to bring Michael into the organization as well. ("Alliances")

McNulty has found peace working as a patrolman and living with Beatrice Russell, and refuses promotions from Daniels, now a major commanding the Western District. ("Soft Eyes") Detectives Shakima Greggs and Lester Freamon, as part of the major crimes unit, investigate Avon Barksdale's political donations and serve several key figures with subpoenas. ("Home Rooms") Their work is shut down by Commissioner Ervin Burrell at Mayor Clarence Royce's request, and after being placed under stricter supervision within their unit, both Greggs and Freamon request and receive transfer to the homicide division. ("Refugees")

Meanwhile, the city's mayoral primary race enters its closing weeks. Royce initially has a seemingly insurmountable lead over challengers Thomas Carcetti and Anthony Gray, with a big war chest and major endorsements. ("Boys of Summer") ("Soft Eyes") Royce's lead begins to fray, however, as his own political machinations turn against him and Carcetti starts to highlight the city's crime problem. ("Home Rooms") This propels Carcetti to victory in the primary, ("Margin of Error") and he easily wins the general election to become Baltimore's new mayor. ("Corner Boys") Carcetti's desire to reduce crime leads him to restrict Burrell's duties and promote the more competent Daniels, whom he is considering later appointing Commissioner. ("Know Your Place")

Other familiar characters become involved in the same middle school where Prez works. Howard "Bunny" Colvin joins a research group attempting to study potential future criminals while they are still young. ("Home Rooms") Dennis "Cutty" Wise continues to work with boys in his boxing gym, ("Soft Eyes") and accepts a job at the school rounding up truants. ("Refugees") Bubbles takes a homeless teenager named Sherrod under his wing. ("Soft Eyes") He encourages the boy to attend class, which he fails to do. ("Refugees") The two of them later find themselves assaulted and robbed constantly by a persistent drug addict. ("Alliances")

Prez has a few successes with his students, but some of them start to slip away. Disruptive Namond is removed from class and placed in the research group, ("Margin of Error") where he gradually develops affection and respect for Colvin. ("Corner Boys") Randy reveals to the assistant principal knowledge of a murder in a moment of desperation, ("Margin of Error") leading to his being interrogated by police ("Unto Others") and thereafter labeled a "snitch" by his classmates. ("A New Day") Michael is unresponsive to the adults around him, including Prez, Cutty, and Bodie, who all see promise in him. ("Refugees") ("Alliances") When Michael feels he must make his hated stepfather leave home in order to protect his little brother, he calls on Chris, the only authority figure whom he thinks he can trust. ("Misgivings") Dukie, who had been nurtured by Prez, is transferred to high school through social promotion, and thus will have to leave their relationship behind. ("That's Got His Own")

Freamon discovers the bodies Chris and Snoop had hidden.("That's Got His Own") Bodie offers McNulty testimony against Marlo and his crew, but is shot dead on his corner by O-Dog, a young Stanfield soldier. ("Final Grades") Sherrod dies after injecting a poisoned vial of heroin that, unbeknownst to him, Bubbles had prepared for their tormentor. ("That's Got His Own") Bubbles turns himself in to the police and tries to hang himself, but he survives and is taken to a detoxification facility. ("Final Grades")

Michael has now joined the ranks of Marlo's killers and runs one of his corners, with Dukie leaving high school to work there. ("Final Grades") Randy's house is firebombed by school bullies for his cooperation with the police, ("That's Got His Own") leaving his caring foster mother hospitalized and sending him back to a group home. Namond is taken in by Colvin, who recognized the good in him. The major crimes unit from earlier seasons is largely reunited, and they resume their investigation of Marlo Stanfield. ("Final Grades")

The fourth season region 1 DVD was released on December 4, 2007. The box set includes the documentaries "It's All Connected: The Wire" and "The Game is Real: The Wire". It was also include commentaries on; episode 1, "Boys of Summer", by David Simon and Ed Burns; episode 4, "Refugees", by Jim True-Frost, Karen L. Thorson and Kate Sanford; episode 6, "Margin of Error", by Dan Attias and William F. Zorzi; episode 11, "A New Day", by Robert F. Chew, Jermaine Crawford, Maestro Harrell, Julito McCullum and Tristan Wilds; episode 12, "That's Got His Own", by Joe Chapelle and George Pelecanos; episode 13, "Final Grades", by David Simon and Nina Noble.[1]