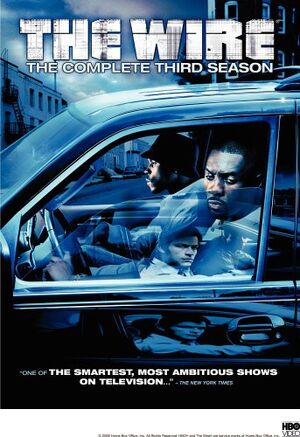 The third season of the American television drama series The Wire premiered on September 19, 2004 and concluded on December 19th, 2004. It consisted of twelve episodes, each running approximately 55-60 minutes in length. The third season focused on reform through the politics of Baltimore City Council and the Office of the Mayor; the conflict between the Barksdale Organization and the ascendant Stanfield Organization; and investigations of both by the Baltimore Police Department.

The demolition of the towers that had served as the Barksdale organization's prime territory pushes their dealers back out onto the streets of Baltimore. ("Time after Time") Avon Barksdale is released from prison early, as promised for his role in unveiling the cause of the inmate deaths. ("Amsterdam") Stringer Bell continues his reform of the organization by cooperating with other drug lords, sharing with one another territory, product, and profits. Stringer's proposal is met with a curt refusal from Marlo Stanfield, leader of a new, growing crew. ("Straight and True") Against Stringer's advice, Avon decides to take Marlo's territory by force, and the two gangs become embroiled in a bitter turf war with multiple deaths. ("Homecoming")

Omar Little continues to rob the Barksdale organization wherever possible. Working with his new boyfriend and two women, he is once more a serious problem. ("All Due Respect") In a heist gone wrong, one of Omar's crew, Tosha, is shot and a Barksdale enforcer is killed. Omar feels great remorse over the death of Tosha and is reprimanded by Bunk Moreland; Bunk also makes a point of telling Omar that little kids were playing near the scene of the gunfight and arguing over who got to play Omar in their game. Omar later makes amends by arranging for Bunk to recover a pistol stolen from a police officer who was shot in the line of duty. ("Dead Soldiers") The violence related to the drug trade makes it an obvious choice of investigation for Cedric Daniels' now-permanent Major Case Unit. ("Dead Soldiers")

Councilman Tommy Carcetti begins to prepare himself for a mayoral race. He manipulates a colleague into running against the mayor to split the black vote, ("Homecoming") secures a capable campaign manager, ("Amsterdam") and starts making headlines for himself. ("Dead Soldiers") ("Amsterdam")

Coming to the end of his career, Major Howard "Bunny" Colvin decides to achieve some real change in the neighborhoods he has long been responsible for. ("All Due Respect") Seeing the spread of drug dealing into previously unscathed areas following the destruction of the towers, he assumes the task of containing the problem. ("Dead Soldiers") Without the knowledge of central command, he sets up areas where drug trade would go unpunished ("Straight and True") and cracks down on any traffic elsewhere. ("Homecoming") His scheme achieves his aims and reduces crime in his district, ("Back Burners") but is eventually exposed to his superiors and city politicians, ("Slapstick") including Carcetti, ("Middle Ground") who uses the scandal to make a grandstanding speech. ("Mission Accomplished") With top brass outraged, Colvin is forced to cease his actions, ("Reformation") accept a demotion, and retire from the department on a lower-grade pension. ("Mission Accomplished")

Dennis "Cutty" Wise, once a drug dealer's enforcer, is released from prison alongside Avon. ("Time after Time") His struggles to adapt to life as a free man show an attempt at personal reform. Cutty tries to work as a manual laborer ("All Due Respect") and then flirts with his former life, going to work for Avon. ("Amsterdam") Finding he no longer has the heart for murder, ("Homecoming") he eventually uses funding from Avon ("Middle Ground") to set up a boxing gym for neighborhood youths. ("Reformation")

The Major Case Unit learns that Stringer has been buying real estate and developing it in order to fulfill his dream of being a successful legitimate businessman. ("Straight and True") However, his lack of experience in the field leads to failure, so he reluctantly refocuses on the drug trade. ("Moral Midgetry")

Believing that the bloody turf war with Marlo is poised to destroy everything the Barksdale crew had worked for, Stringer gives Major Colvin information on Avon's weapons stash But Stringer is himself being betrayed by Avon: Brother Mouzone had returned to Baltimore and tracked down Omar to join forces. Mouzone tells Avon that his shooting must be avenged. ("Middle Ground") Avon, remembering how Stringer disregarded his order which resulted in Stringer attempting to have Brother Mouzone killed, possibly still furious over D'Angelo's murder (Stringer having finally confessed the truth), and fearing Mouzone's wrath, informs Mouzone of Bell's upcoming visit to his construction site. There, Mouzone and Omar corner him and shoot him to death. ("Middle Ground")

Colvin tells McNulty about Avon's hideout, and armed with the information gleaned from selling the Barksdale crew pre-wiretapped disposable cell phones, the detail stages a raid, arresting Avon and most of his underlings. Barksdale's criminal empire lies in ruins, and Marlo's young crew simply moves into their territory. Thus the drug trade in West Baltimore continues with little change. ("Mission Accomplished")