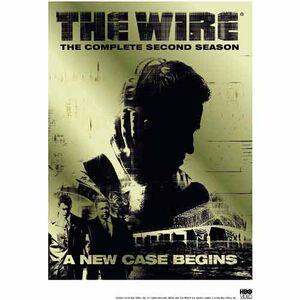 The second season of the American television drama series The Wire premiered on June 1, 2003 and concluded on August 24th, 2003. It consisted of twelve episodes, each running approximately 57-63 minutes in length. It follows three primary plotlines: the plight of the blue-collar urban working class as exemplified by stevedores who become involved in smuggling narcotics, prostitutes, and other contraband; a Baltimore Police Department investigation to arrest them; and the efforts of the Barksdale Organization to retain power after the previous season's arrests.

McNulty harbors a vendetta against his former commanders for assigning him to the marine unit. When fourteen young unidentified women are found dead in the port area, he makes a point of proving that they were murdered in his commanders' jurisdiction. Meanwhile, police Major Stan Valchek gets into a feud with stevedore union leader Frank Sobotka over competing donations to their old neighborhood church. ("Ebb Tide") Valchek demands a detail to investigate Sobotka. ("Collateral Damage") Daniels, having impressed the Major with his work on the Barksdale case, is assigned to lead the detail. ("Hard Cases")

As with the previous season, the targets of the investigations are explored and fully realized as characters. Life for the blue-collar men of the port is increasingly hard and work is scarce. As union leader, Sobotka has taken it on himself to reinvigorate the port by convincing politicians to support much-needed initiatives. Lacking the funds needed for this kind of influence, Sobotka has become involved with a smuggling ring. ("Collateral Damage") Around him, his son and nephew also turn to crime, as they have few other opportunities to earn money. ("Hot Shots")

It becomes clear to the Sobotka detail that the dead girls are related to their investigation, as they were in a container that was supposed to be smuggled through the port. ("All Prologue") They again use wiretaps to infiltrate the crime ring and slowly work their way up the chain towards The Greek, the mysterious man in charge. But Valchek, upset that their focus has moved beyond Sobotka, gets the FBI involved. The Greek has contacts inside the FBI and starts severing his ties to Baltimore when he learns about the investigation. ("Storm Warnings")

After a dispute over stolen goods turns violent, Sobotka's son, Ziggy is charged with the murder of one of the Greek's underlings. Sobotka himself is arrested for smuggling; he agrees to work with the detail to help his son, finally seeing his actions as a mistake. ("Storm Warnings") However, the Greek learns about this through the FBI and scuppers the case against himself by having Sobotka killed. ("Bad Dreams") The investigation ends with the fourteen homicides solved but the perpetrator already dead. Several drug dealers and mid-level smuggling figures tied to the Greek are arrested, but he and his second-in-command escape uncharged and unidentified. The Major is pleased that Sobotka was arrested; the case is seen as a success by the commanding officers, but is viewed as a failure by the detail. ("Port in a Storm")

Across town, the Barksdale organization continues its business under Stringer while Avon and D'Angelo Barksdale serve prison time. ("Collateral Damage") D'Angelo decides to cut ties to his family after his uncle organizes the deaths of several inmates and blames it on a corrupt guard to shave time from his sentence. ("Hard Cases") Eventually Stringer covertly orders D'Angelo killed, faking it as a suicide. ("All Prologue") Avon is unaware of Stringer's duplicity and mourns the loss of his nephew. ("Backwash")

Stringer also struggles with the loss of his drug suppliers and bad quality product. ("Undertow") He again goes behind Avon's back, giving up half of Avon's most prized territory to a rival named Proposition Joe in exchange for a share of his supply. Avon, unaware of the arrangement, assumes that Joe and other dealers are moving into his territory simply because the Barksdale organization has too few enforcers. He contracts a feared assassin named Brother Mouzone. ("Stray Rounds") Stringer deals with this by tricking his old adversary Omar into believing that Mouzone was responsible for the vicious killing of his partner in their feud in season one. Seeking revenge, Omar shoots Mouzone, but realizes Stringer had lied and dials 9-1-1. ("Bad Dreams") Mouzone recovers and leaves Baltimore, and Stringer is free to continue his business with Proposition Joe. ("Port in a Storm")

The second season continued to follow characters in the police and those involved with the Barksdale Organization. The returning starring cast included Dominic West as Officer McNulty, whose insubordinate tendencies and personal problems continued to overshadow his ability. Lance Reddick reprised his role as Lieutenant Cedric Daniels, who was sidelined because of his placement of case over career but used his political acumen to regain some status. Sonja Sohn played Shakima Greggs, who had transferred to a desk job but could not resist the lure of a good case. Deirdre Lovejoy starred as assistant state's attorney Rhonda Pearlman, the legal liaison between the detail and the courthouse.

Wood Harris and Larry Gilliard, Jr. reprised their roles as newly incarcerated drug dealers Avon and D'Angelo Barksdale. Idris Elba's character Russell Bell took over the operations of the Barksdale Organization. Andre Royo returned as Bubbles, who continued to indulge his drug addiction and act as an occasional informant.

The new season also introduced a further group of characters working in the Baltimore port area, including Spiros Vondas (played by Paul Ben-Victor), Beatrice Russell (Amy Ryan), and Frank Sobotka (Chris Bauer). Vondas was the underboss of a global smuggling operation, Russell an inexperienced Port Authority officer and single mother thrown in at the deep end of a multiple homicide investigation, and Sobotka a union leader who turned to crime in order to raise funds to save his union.