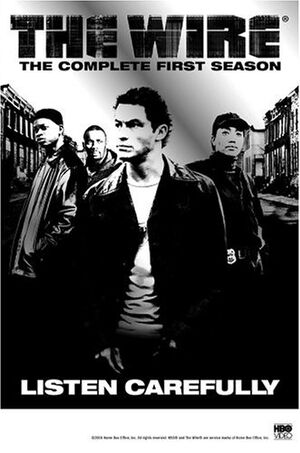 The first season of the American television drama series The Wire premiered on June 2, 2002 and concluded on September 8, 2002. It consisted of thirteen episodes, each running approximately 55-65 minutes in length. It follows the Baltimore Police Department as they build a case against a narcotics trafficking outfit known as the Barksdale Organization.

The investigation is triggered when Detective McNUlty meets privately with Judge Phelan following the acquittal of D'Angelo Barksdale for murder after a key witness changes her story. McNulty tells Phelan that she has probably been intimidated by members of a drug trafficking empire run by D'Angelo's uncle, Avon Barksdale, having recognized several faces at the trial, notably Avon's second-in-command, Russell Bell. He also tells Phelan that nobody is investigating Barksdale's criminal activity, which includes a significant portion of the city's drug trade and several unsolved homicides. Phelan takes issue with this and complains to senior Police Department figures, embarrassing them into creating a detail dedicated to investigating Barksdale. However, owing to the department's dysfunctionality, the investigation is intended as a façade to appease the judge. ("The Target")

An interdepartmental struggle between the more motivated officers on the detail and their superiors spans the whole season, with interference by the higher-ups often threatening to ruin the investigation. The detail's commander, Cedric Daniels, acts as mediator between the two opposing groups of police. ("The Detail") ("The Buys")

Meanwhile, the organized and cautious Barksdale gang is explored through characters at various levels within it. The organization is antagonized by a stick-up crew led by Omar Little, and the feud leads to several deaths. ("The Wire") ("Lessons") Throughout, D'Angelo struggles with his conscience over his life of crime and the people it affects.

The investigation eventually secures dialed number recorders, Title III wiretaps, and pager clones to monitor the Barksdale organization. This leads the investigation to areas the commanding officers had hoped to avoid, including political contributions. ("Game Day")

The police have little success with street-level arrests or with securing informants beyond Wallace, a young low-level dealer and friend of D'Angelo. When an associate of Barksdale's is arrested by another team and offers to cooperate, the commanding officers order a sting operation to wrap up the case, during which Detective Greggs is shot and seriously hurt. ("The Cost") This triggers an overzealous response from the rest of the department. ("The Hunt")

This causes the detail's targets to suspect that they are under investigation. Wallace is killed by his childhood friends Bodie and Poot, on orders from Stringer Bell, after leaving his "secure" placement with relatives and returning to Baltimore. D'Angelo Barksdale is eventually arrested with a large quantity of drugs, and learning of Wallace's murder, is ready to turn in his uncle and Stringer. ("Cleaning Up")

However, D'Angelo's mother convinces him to rescind the deal and take the charges for his family. The detail manages to arrest Avon on a minor charge and gets one of his soldiers, Wee-Bey, to confess to most of the murders, some of which he did not commit. Stringer escapes prosecution and is left running the Barksdale empire. For the officers, the consequences of antagonizing their superiors are severe, and Daniels and McNulty are both assigned to nightmare jobs as punishment. ("Sentencing")