Port in a Storm

View source
"Port in a Storm" 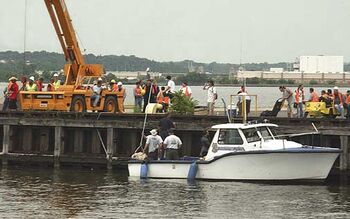 "Port in a Storm" is the twelfth and final episode of the second season of The Wire. It is the twenty-fifth episode of the series overall. It premiered on August 24, 2003. The episode was written by David Simon and directed by Robert F. Colesberry.

The title refers to the turmoil taking place at the port, as foreshadowed by the previous episode title Storm Warnings. The "storm" includes the death of Frank Sobotka, the progression of the trials of several port characters as well as U.S. Marshals taking over the checker's union hall.  The phrase "any port in a storm" usually refers to the lower standards for females after a long voyage. For the characters in this episode, it refers to whatever is safe/works.

The Greek referring to that everything they do is always for the business they are running, from the manipulation of the ports to their own names and lives they are twisting the world to meet their own ends but they are also part of the institutions.

The stevedores gather for work as Officer Claude Diggins pulls a floating corpse from the water. Once it is ashore they all recognize the body as Frank Sobotka. When Frank does not return from his meeting with The Greek Nick Sobotka drives out to the meeting place. Nick returns to the docks after finding Frank's car empty.

When Nick learns of Frank's death he is restrained from going after The Greek by the other stevedores until his father, Louis, arrives. Nick's father takes him to South Eastern headquarters to turn himself in.

The Greek meets with Spiros Vondas and they discuss their plans. The Greek decides to leave Nick alone because the police are after him. The Greek decides Nick poses little threat as he does not know his name (even his nationality is false) and Spiros can easily use another name. Spiros asks what to do with their shipment on the docks and The Greek decides it is safest to walk away.

Later, the FBI visit the union hall and tell them that they need to change their leadership or the union will be decertified. Ott responds by withdrawing from the election and standing behind Sobotka. The union's loyalty to their leader will destroy their future.

Stringer Bell visits Brother Mouzone's bedside and tells him they will catch whoever was responsible for his shooting. Mouzone insists he wants no assistance from them and that he will find those responsible on his own. Stringer incriminates himself when he jumps at Mouzone's use of a plural when describing his attackers.

Bubbles and Johnny Weeks spot a drug addict who has overdosed on the new more powerful package. While Johnny keeps watch Bubbles attempts to steal medical supplies from the responding ambulance. Officer Santangelo (Season 1) apprehends them and they end up in an interrogation room in the South Eastern district. Detectives Kima Greggs and Jimmy McNulty discuss Bubbles options with him, they insist that he give them some information to secure the charges against him being dropped. Bubbles claims to have little to tell them, Johnny reminds him of Brother Mouzone shooting Melvin "Cheese" Wagstaff. Bubbles tells the detectives that the shooting was nothing as Mouzone used a "rat round". He tells them about the East side drug dealers moving in on Avon Barksdale's towers. Bubbles describes the situation as Bell and the East siders sharing. Bubbles finally lets them know about the change in the quality of product being slung by the Barksdale organization. Bubbles revelations prompt Kima and McNulty to start surveiling the towers where they see the two crews working alongside one another. Later, Kima and Cheryl shop for baby products and Kima is uncomfortable enough to prompt rebuke from Cheryl. Back at the detail officer, McNulty and Kima check with Lester Freamon about information on Proposition Joe's supply uptake from The Greeks. They learn that he recently doubled his order.

Omar Little discusses Brother Mouzone with Butchie. Butchie reassures Omar that Mouzone could not have been involved in Brandon's death. Butchie comments that Avon, Stringer and Avon's father are all pure evil. Realizing that Stringer set him up Omar promises Butchie that he will get his revenge.

Spiros and Proposition Joe meet in the park to discuss their future business. Spiros assures Proposition Joe that he has new people coming in to restart their operation. When Joe asks where they are moving to, Spiros walks away in silence.

Stringer meets with Avon in prison to discuss Brother Mouzone's failure to protect their territory. Avon worries that if they cannot maintain their reputation they will lose their business. Avon chastises Stringer for asking Mouzone who attacked him. Avon finally accepts that they must work with Prop Joe. Finally they reaffirm their loyalty to one another. Stringer meets with Proposition Joe to give him the good news, Joe tells Stringer that their resupply will have a slight delay. The meeting is photographed by Greggs and McNulty.

Lieutenant Cedric Daniels, Greggs and Lester Freamon discuss the disappearance of their Greek suspects and the identity of the mysterious man that Spiros met with. Greggs reassures Daniels that Sobotka could still break the case for them.

Daniels meets with Major Valchek and makes a case for Roland "Prez" Pryzbylewski's career after he punched Valchek in the detail office. Daniels successfully negotiates Valchek not making a charge against Prez by pointing out to him the witness statements collected after that record Valchek insulting a subordinate officer (Daniels even points out his unit could cheat the statement but the FBI members in the office will not). Valchek then agrees that Prez can return to the detail after two months of midnight shift narcotics work in the southeastern followed by a written letter of apology to everyone in the room acknowledging that he assaulted Valchek unprovoked. At the same time, Valchek expresses his dislike for Prez stating that he is burdonsome and told his daughter not to marry Prez. Valchek furthermore says he has only guided Prez through the department on his daughter's behalf.

Freamon is collecting photographs of headless and handless corpses that Landsman sent over to him. The photographs are at the Southeastern desk and Freamon is present when Nick Sobotka turns himself in and recognises his name. Meanwhile, Daniels, Pearlman and the FBI team meet with Acting Commissioner Ervin Burrell and Colonel William Rawls to discuss the case. With Sobotka dead just before he was going to act as their informant Pearlman tells them that the case has stalled. Daniels reminds them of the arrests they have made so far and the FBI are happy to have enough evidence to force the union to change its leadership. Rawls is still concerned over his fourteen Jane Doe homicides and Pearlman and Daniels have no answers for him. Freamon phones Daniels during the meeting to tell him that Nick Sobotka has come in and is ready to talk.

Rhonda Pearlman and Daniels interview Nick in the detail office. He reveals Spiros' offer to help Ziggy Sobotka that lured Frank to their meeting. Nick tells them that he found Frank's car. He gives them information on everyone he can on their board including Spiros, Eton Ben-Eleazer and Sergei. He links Sergei to the killing of the crewman in Philadelphia by hearsay. Finally Nick identifies The Greek in the photograph but is unable to give them anything beyond that.

Freamon tells Agent Terrence "Fitz" Fitzhugh it is best to keep Nick's involvement quiet. Fitz pauses before faxing the paperwork and then decides to check on Agent Koutris. He is dismayed to learn that Koutris has been gone from San Diego for a year.

Thomas "Herc" Hauk and Ellis Carver are left waiting outside Nick Sobotka's home. Herc convinces Carver that they have to leave the detail to get any respect. They become increasingly frustrated with their waiting game and eventually tell Nick's father he must give himself up. They are outraged when he tells them that he has been in custody for nearly 24 hours already. Angrily, they march to Daniels office where they then discuss how they feel they are not being properly used in the detail. Daniels pleas that surveillance is part of the job but Carver feels they are being treated like pack mules and Daniels is unrecognizing of his rank in the department. Carver then points out a post in the Western district working as a D.E.U. sergeant for Major Colvin that he is going to request a transfer into given the unit's street work and a recognition of Carver's rank. Herc follows leaving the unit to do more exciting police work.

Freamon and Bunk Moreland try to identify the body of the Philadelphia crewman from their records of headless and handless corpses. Beatrice Russell and Bunk travel to the Philadelphia port to ask more questions about their crewman's disappearance and after little success the officer finally reveals that they keep security tapes on file. When they show the footage to Sergei he finally begins to talk and gives up Vondas for the murder of the crewman who he implicates in the death of the girls.

Nick, Ashley and Aimee are placed in protective custody by the FBI. Nick tells Aimee they finally have a place together. The following day Nick leaves their motel to head for work. La La tells him there is only one ship so their lack of seniority means another day without work.

At the docks the detail find The Greek's last shipment of drugs and decide to keep watch on it. Bunk reports his information on Sergei to Daniels who presses him for more information on The Greek. Sergei reveals a location that The Greek uses for meetings. Daniels moves on the Greeks hotel swiftly but is once again a step behind - Spiros and The Greek board a plane.

With their case work over the detail drink in a bar. Greggs and McNultys use their photos of Bell and Proposition Joe to convince Daniels that they could be a target for the major case unit. Fitz tells Daniels that the leak was from his office. Frank Sobotka continues to haunt Major Valchek from beyond the grave - the surveillance van is still making its way around the globe one port at a time.

As Nick mourns his Uncle's death by the docks a montage of scenes from around Baltimore unfolds with Steve Earle's "Feel Alright" playing in the background: US Marshalls close the union hall; Johnny Fifty urinates on the Greeks last container, still under surveillance; Pearlman prosecutes Eton and Horseface; Rawls and Landsman celebrate the clearance of their Jane Does; Ziggy serves his time; Baltimore politicians break ground on the condominiums that will replace the grain pier; Beadie Russell returns to work at the port; Freamon dismantles the detail's investigative board, leaving up the photo of The Greek; the drug trade continues in the South Eastern with Frog's crew finally driving an old woman to sell her home; Poot Carr and Puddin watch the police cruise their territory; the stevedores get drunk on a street corner; Proposition Joe takes a shipment of drugs from the back of a truck; the truck also dispatches a group of disorientated women and finally a series of images of industrial decay flash on screen. Nick walks away and rain begins to pour.[1] [2][3]