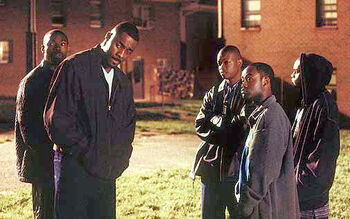 Using information from the wiretap, Detectives Greggs, Herc, Carver, and Sydnor catch a runner on his way to refill the Pit's heroin supply. Avon worries about a possible informant and Stringer impedes the detail's investigative efforts by instructing his underlings to stop using payphones.

As the wiretaps are killed by the abandonment of the low-rise payphones, the detail secures merely one arrest - Kevin Johnston - from the information gleaned from the wiretap. The Homicide Unit arrests Bird for the murder of state's witness William Gant. The title might might also refer to Rawls's demand that Santangelo close at least one homicide case; this merely requires that a suspect be arrested. The homicide is deemed solved even if the arrestee is not convicted.

Bunk uses this phrase when Omar discusses his rules for life on the street. It also refers to the codes that the law and the street also follow, such as that there should be no talking on phones about business which Stinkum breaks resulting in being berated by Stringer.

The Barksdale detail discuss the information they have garnered from their cloned pagers and wiretap, with Roland "Prez" Pryzbylewski showing a gift for translating slang and obscured words. They have identified a resupply with a specific time. Detectives Herc, Ellis Carver, Leander Sydnor and Kima Greggs make a labored arrest of the young package carrier, but let Stinkum (the driver) get away to protect the wiretap. Stinkum pages Stringer Bell from outside the towers and Sydnor rushes over to photograph him as the call is returned, so they can legally monitor the phone call. In interrogation, Prez recognizes the carrier as Kevin Johnston, the boy he blinded in one eye. Lieutenant Daniels appeals to Johnston to contact him if he ever wants to change his life; Johnston mocks his offer.

Detective McNulty and ASA Rhonda Pearlman meet with Judge Phelan, who belittles McNulty and then flirts with Pearlman. Phelan is surprised that Daniels stood up for the wiretaps, and worries that McNulty no longer trusts him since the murdered witness story hit the newspapers. McNulty feels that he cannot trust anyone at the moment. Daniels attends a fundraiser with his wife, Marla. Also in attendance are Deputy Commissioner Ervin Burrell and State Senator Clay Davis. Daniels finds himself in the kitchen with Davis’ driver Damien "Day-Day" Price, who is viewing the house's valuables. He speculates about the profit that could be made until Daniels reveals that he is a police officer.

Major William Rawls puts more pressure on Detective Michael Santangelo to inform him of McNulty's actions. He then gives him an ultimatum - if he wishes to remain in homicide, he must either clear at least one of his unsolved cases by day's end or inform on McNulty. Sergeant Jay Landsman jokingly recommends a psychic, Madame LaRue, and a desperate Santangelo follows her advice.

McNulty and Bunk Moreland work on the William Gant murder case based on Omar Little’s tip that Marquis "Bird" Hilton was involved. They canvass the buildings opposite the crime scene looking for witnesses and find an older woman who corroborates Omar's story, and is willing to testify. Omar informs them where Bird goes to get high. The entire detail covers the shooting gallery; when Bird comes out, Bubbles identifies him and Freamon neutralizes him with a malt liquor bottle. Bird is arrested, and a ballistics test confirms that his gun was the murder weapon. After Bird refuses to cooperate with the interrogation, he is beaten by Daniels, Landsman, and Greggs. Omar gives a statement to Bunk, criticizing Bird for killing a civilian. When Bunk asks Omar if he has any other tips on old murders, he gives information of Denise Redding, which happens to be one of Detective Santangelo's open cases. McNulty relays Omar’s information to Santangelo, waking him up at home to inform him they have solved one of his open cases. Relieved, Santangelo tells McNulty that Rawls is after him. McNulty visits Pearlman to discuss his worries about Rawls as he loves the job too much for Rawls to take it from him.

Greggs gets Johnny out of his charge for possession on Bubbles's behalf; part of his deal involves going into a treatment program. Bubbles and Johnny attend a Narcotics Anonymous meeting as part of the deal. Bubbles is impressed by the speaker, Walon, and declares that he has a strong desire to live at the end of the the meeting.

D'Angelo Barksdale visits Orlando's to see Avon Barksdale. Orlando tells D'Angelo he has a proposition for him. Later, Orlando asks him to help sell some cocaine from Washington DC behind Avon’s back; D'Angelo tells Orlando he will have to think about it.

In the office, Stringer Bell berates Stinkum for talking on the phone and insists that something is wrong in D'Angelo's crew. Avon tells D'Angelo to change up and stop all trade for now. Avon also worries that the police do not seem to be onto Stinkum, as they should have connected him through the truck's plate number already. In The Pit, Bodie Broadus quizzes fellow dealer Poot Carr about Wallace. Wallace is holed up in his squat and has started taking drugs, as he is still upset over the murder of Brandon. Stringer orders them to rip out the payphones in the pit and to vary which payphones they use, not using the same one more than once per day.[1][2][3]