The Wire
Register
Don't have an account?
Sign In
Advertisement
in: Characters, Season 1 Characters, Citizens,
and 2 more

Lyles witnessed D'Angelo Barksdale murder Pooh Blanchard in the lobby of the 221 building in Franklin Terrace. Homicide detective and the primary investigator, Frank Barlow, questioned her and she identified Barksdale in a photo array. The Barksdale Organization later intimidated her to ensure she would retract her earlier statement. ("The Target") 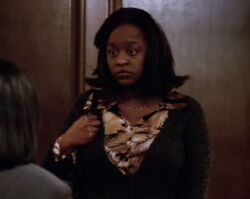