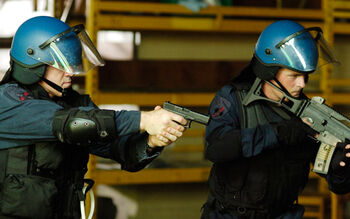 Late editions are revised edits of a daily publication released throughout the day. It also refers to the last attempts of various characters to reform themselves in a timely fashion.

"Deserve got nuthin' to do with it."
―Snoop

The cold opening shows Lester Freamon still slightly flummoxed by Marlo's clock codes. He does figure something out, however, and calls Sydnor, who is tailing Monk, to peel off and head out to Broening Highway. "This is a fresh one," he tells Sydnor. Freamon then calls McNulty and delivers words they both had been waiting for: "It's on."

Freamon meets with Sydnor. Sydnor reports what he had seen, telling him about Partlow's actions. Freamon tells Brown to forget Partlow and go for the big kill. "The case is in the phones," he says, but admits that a Title III would be needed to look at them. Right before leaving, Freamon tells Sydnor that it is "time to 'fess up."

Felicia "Snoop" Pearson sits in Levy's office with O-Dog, who is still recovering from the shot he took from Omar during the ambush at Monk's apartment. O-Dog is reluctantly taking the blame for the gun charge that Snoop and Chris got hit with the previous year. Levy tells O-Dog he might have to do a short stretch, but assures him that he will be "well compensated." After the two leave, Herc recalls how different things are when police officers take "one in the line" as opposed to street soldiers. "Marlo runs a tighter ship," Levy explains.

Chris arrives at the dock to inspect the shipment. He is satisfied with what he sees and gives the go-ahead. Officers Garrick and Dozerman are watching from the weeds.

Haynes continues his investigation regarding Templeton's suspected lies. He enlists an old colleague, Robert Ruby, to do some background checking on Scott, saying he needs "fresh eyes on the fellow."

Dukie continues to work with the arabber.

Back at the warehouse Cheese and his crew roll up. The officers, watching from a distance, report the white van that pulled up. Sydnor tells them to "stay on the gate."

Rawls and Daniels express their frustration to Steintorf, who tells them to continue manipulating the crime statistics. "Be creative," he tells them as he leaves. Freamon arrives at the station and tells Daniels about the sting on Marlo. Sydnor calls Freamon in the middle of this conversation, telling him they caught Monk "riding dirty." Freamon hangs up and tells Daniels who he needs arrested. Taken aback, Daniels calls Pearlman, asking, "Are you sitting down?"

The raid begins. Heavily armored police vehicles crash through the gates of the warehouse. Sydnor busts Cheese Wagstaff himself. Freamon arrives at the warehouse, and uncovers even more narcotics. Bunk, complete with cigar, has finally served his warrant on Chris, and looks elated at having the man in cuffs. Freamon, at Marlo's hangout spot, shows disgust when he finds the infamous clock that Marlo, who is in flex cuffs along with several of his soldiers, had been using. Snoop shows up at Michael's home, and they watch the bad news on the television "Do I still have to take that charge?" O-Dog chimes in. Mayor Carcetti gives another rousing speech about the raid, while being mocked by Bill Zorzi under his breath. Alma attempts to interview Daniels, who coldly remarks "It's a good day for the good guys." When she presses him for more comment, he says he's upset because of the false and unflattering remarks they attributed to him regarding Burrell.

Marlo sits in jail with Monk, Cheese, and Chris. They speculate on how they got busted, but the conversation is momentarily halted when Monk lets Omar's rants regarding Marlo slip, prompting Marlo to get extremely angry. "My name was in the streets?" He vows to rectify the situation. The conversation goes back to the bust, and they debate whether Michael Lee was the snitch.

Landsman berates McNulty on his lack of progress on the serial killer investigation. McNulty looks very depressed and Greggs makes it even worse for him with her snide comments. McNulty tries to rationalize it by saying that Marlo is locked up, but Greggs still isn't impressed.

Scott Templeton continues to get praise for his fabricated stories. He finds out that his stories might have a shot at a Pulitzer Prize. The newsroom men debate on how to portray the "Dickensian aspect." Haynes scratches the quote Alma received from Daniels and continues giving Templeton cold looks.

Still depressed, McNulty refuses to partake in Freamon's celebratory drink. McNulty expresses his regret over his and Freamon's fake case.

Michael and Spider sit on a stoop and debate Omar's death. Michael reports it as it happened, but Spider tells a different, more sensational story. Snoop arrives and chats with Michael. She tells him that with everyone locked up, she needs him for some "serious business." Michael's suspicions are raised when she tells him that there is no need for him to bring a gun.

"Bunny" Colvin and his wife proudly watch Namond deliver an informative speech about AIDS at an Urban Debate League event. Colvin spots Carcetti walking in and shakes his head in disgust. Carcetti later attempts to apologize for his role in expediting the teardown of "Hamsterdam." Carcetti says "nothing could be done with your thing," which carries echoes of "our thing," the term used by Mafiosos. He is frozen out by the bitter Colvin, who replies, "then I guess nothing can be done," underscoring the conflict between police work and political ambition that has been a feature of the series.

McNulty continues sending men out for the serial killer case with little enthusiasm. Landsman orders McNulty to go to the scene of another homeless man's death. Greggs is unsympathetic to McNulty's dilemma at being ordered to go to a crime scene they both know is not relevant to his "case." As expected, once on the scene, he sees the body has none of the post-mortem signatures (wrist ribbon, bite marks) that he himself invented. Next to the body, in a police chain of custody zip bag, several business cards have been picked up.

Haynes questions Templeton briefly, then tries to get admission into Walter Reed Army Medical Center so he can investigate Templeton's writing regarding Terry Hanning, the homeless Iraq War veteran. At the hospital Haynes watches as Hanning's military buddy shows off his state-of-the-art prosthetic hands. The vet verifies Hanning's story. He reiterates that while many bad things happened in Iraq, nothing in the way of a firefight happened on that particular day.

Bubbles continues talking with Mike Fletcher, who is interested in his story. Fletcher looks on as Bubbles' sister appears uninterested in celebrating Bubbles' anniversary for staying clean.

Freamon meets with Senator Davis, trying to get more information out of him, and after more threats, gets info on the corrupt dealings of Maurice Levy.

Marlo talks with Levy, who gives him even more reason to believe someone is snitching.

Greggs approaches Carver to ask how he felt bringing charges against Colicchio for brutality against a citizen. He indicates he has made his peace with it. She seems to be mulling how ratting out McNulty might weigh on her conscience. Greggs visits Daniels' office, looking grim.

Michael Lee sits in a cab, watching Snoop from a distance. He views her talking to the very guy he was supposed to kill, realizing that his suspicions were valid. He is being set up for a hit.

Daniels and Pearlman visit evidence control and confirm what Greggs had told him earlier. The serial killer case is bogus. The phone that was supposed to be the serial killer's actually belonged to Marlo.

Snoop picks Michael up to go to the spot where his hit will take place. Michael looks a bit nervous, but continues his tradition of questioning the task at hand. After Snoop brushes him off, Michael draws her into an alley, under the pretense of having to urinate. Once there, he pulls a gun on Snoop, who explains why the hit was out on him. Staring down the barrel of Mike's gun, Snoop also tells him that he was "never one of them" and never could be. Mike cocks his gun. Snoop, accepting her fate, checks herself out in the vehicle's side mirror and casually asks how her hair looks. Michael replies, "You look good, girl," before pulling the trigger.

He returns to his home and rushes Dukie and Bug to gather their things and leave the house. He then drives them to his aunt's suburban Howard County home, where she is awaiting Bug's arrival. Michael walks Bug to the door, fighting back tears as he says goodbye to his little brother. Michael, forced to abandon Dukie, drops him off at the Bruce Street stable where the arabber lives among other homeless people and junkies. Dukie reminisces about humorous events that happened the year before, asking "You remember that one day summer past ...?" but after a long pause Michael replies, "I don't." They say goodbye and part, Dukie hesitating as he sees the arabber injecting heroin.

Retrieved from "https://thewire.fandom.com/wiki/Late_Editions?oldid=13832"
Community content is available under CC-BY-SA unless otherwise noted.