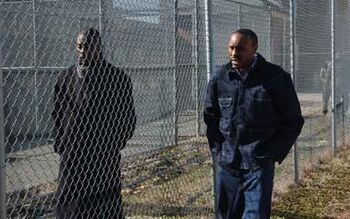 "Hot Shots" is the third episode of the second season of The Wire. It is the sixteenth episode of the series overall. It premiered on June 15, 2003. The episode was written by David Simon and directed by Elodie Keene.

Hot shots are narcotics which have been spiked with poison, with the intent to kill a police informant or other undesirable. Barksdale has this package brought into the Maryland House of Correction to incriminate CO Dwight Tilghman.

"What they need is a union."
―Russell

Officer Russell makes this dry observation about prostitutes. The dwindling efficacy of The International Brotherhood of Stevedores makes this an example of verbal irony.

Detectives Bunk Moreland and Lester Freamon interview the crew of the Atlantic Light, but they all refuse to speak English responding in French, Arabic, Hindi, German, Spanish, Portuguese, Russian and Vietnamese amongst other languages. Frustrated, Bunk and Freamon lose their temper with the ship's lone black seaman (whom Bunk calls Kunta Kinte). The first mate is more forthcoming and admits that many of the crew asked for pay advances during the trip. He believed that they may have been gambling, but Bunk thinks that they may have been spending it on the girls. He shows them the cabin and possessions of two crew members who jumped ship. He tells them that the crew members will speak English again but not in the police's presence. Furthermore, he convinces Bunk and Freamon that if they bring in a translator, nothing will be said as the crew generally agrees not to inform on each other as what happens below decks stays below decks. They then agree to let the ship go with little evidence and jurisdiction for interrogation.

The detectives later report back to Sergeant Landsman at the homicide unit. He berates them for letting the boat go. He asks Officer Russell about her status and tells her that she can wear plain clothes while she is detailed to the case. Later, Bunk and Russell try to trace the movements of the container that the bodies were found in and find that most of the paperwork has been falsified.

Officer McNulty visits the morgue and discusses the case with Randall Frazier, the medical examiner. He learns that three of the girls received breast implants in Budapest and that many of them had intercourse while on the ship. He visits the homicide unit with this information but Russell, Freamon and Bunk have matched his deduction and come up with the same theory and shatter McNulty's pride by beating him to everything he was about to say. McNulty and Russell agree that they do not want to see the girls unidentified and shipped out as medical cadavers.

Bunk, Russell and Freamon take the French addresses listed on the paperwork to the FBI, who confirm that they are false and give the detectives more information on the international vice trade. Later, McNulty joins Bunk and Russell in a bar. McNulty asks Russell about her children and learns that she is a single mother. They discuss their progress in the case and McNulty tells Bunk of his desire to put a name to the dead girl he pulled from the harbour.

Major Valchek is informed of his missing surveillance van by a sergeant. It is seen being delivered to stevedores in Wilmington, who add an additional bumper sticker to the rear doors. Prez is annoyed that his commander in the detail will not authorize telephone monitoring on their target, Frank Sobotka, and that their investigation appears to have gotten a false start. Later, at Valchek’s anniversary party, Prez tells him that the detail will move slowly under Lt. Grayson and that Lieutenant Daniels would have brought in a better case on the Barksdale detail if it had not been for the interference of acting commissioner Burrell.

Valchek is prompted to visit the detail offices when he receives photos of the missing surveillance van. He finds the detectives playing poker and the lieutenant missing. Enraged, Valchek tracks Burrell to a fundraiser where he is awaiting the vote as police commissioner. Valchek regards the detectives that he has been sent by stating "They couldn't catch the clap in a Mexican cathouse with a fistful of fifties." Burrell attempts to quiet Valchek down who then claims he'll tell the first district to vote against his nomination for commissioner in addition to other politicians he knows. Valchek then claims Burrell's quest for commissioner will be made uglier than he wishes for it to be unless he complies with his request for a real police detail. He then forces Burrell into assigning Daniels to the Sobotka detail claiming he can make Burrell's life hell with all of his city hall connections for non-compliance.

Omar Little is back in town with a new boyfriend named Dante in tow. They stake out a stash house to potentially rip off. They are beaten to the take by Kimmy and Tosha Mitchell, fellow thieves. Omar tails them to their hideout and announces his return to Baltimore, taking their haul from them. Later, the two pairs team up to scout out another stash house.

When Dante and Omar are alone, Dante shows a jealous side. Omar tries to convince him he is not interested in the women beyond business. Dante insists the only way he can be convinced is to have sex with him, and the two kiss. The four later hold up another stash house using Tosha to pose as a caring neighbor to the daughter of the man in charge.

McNulty visits Daniels in the evidence offices and they discuss their career misfortunes. McNulty is there to return the evidence on the Gant case and discusses looking for Omar at ASA Nathan and Bunk’s request. Daniels tells McNulty that he has put in for early retirement and plans to use his law degree to become a lawyer. McNulty learns that Kima Greggs is working in asset forfeiture and has reached the second year of her pre-law course.

McNulty returns his sons to their home after spending the evening with them. Elena tells him that she is sending him a separation agreement. He receives the paperwork shortly afterwards.

Nick Sobotka has his hair cut by his girlfriend Aimee while their daughter Ashley sits nearby. She complains that their daughter is talking about them not living together in her classes at school. She wants them to move in together and he tries to reassure that they will when they can afford it. At the docks, he complains about the lack of work and his position with Aimee to Ziggy. Ziggy tries to convince him to join him in the drug trade for a second time. Nick angrily rebukes his offer, stating that the drug business is high risk for low return. Nick tells Ziggy he will think of something else.

Nick and Ziggy steal a container of cameras from the docks with the help of Johnny Fifty and Horseface. They sell the cameras to George "Double G" Glekas, the warehouse manager and fence for the Greeks. Ziggy haggles up the cameras' selling price and angers Glekas by taking his photo with one of the cameras. Nick firmly demands a 20% share of the profits. Glekas agrees to 10% rather than the 8% because he likes Nick. Glekas checks the deal with Spiros Vondas and tells him that although he thinks Ziggy is using drugs, they can trust Nick, as he is smart.

Frank Sobotka meets with a checker named Ringo who is having trouble getting enough work to live on. Sobotka sends Ringo to Delores' bar and tells him to order a shot and a beer on him. When Ringo arrives at the bar and uses Frank Sobotka’s name, Delores gives him a bundle of cash. Ziggy is there to see the exchange.

Sobotka attends a political evening at Father Lewandewski’s church with his lobbyist Bruce DiBiago. He is complimented on his presence by district seven councilman Bobby, who has promised his support. DiBiago pulls him aside and tells him that he needs to focus on the people who may not support them: John Carter, Lisa Tobin, and Clay Davis. In particular he says that Davis has taken $40,000 of contributions from them and still not made any promises. Sobotka is outraged but is forced to make nice with Davis to court his support.

Stringer Bell visits Donette to ask her to visit D'Angelo at the prison. The two flirt throughout the discussion and once he has delivered his message Stringer kisses and undresses Donette.

Stringer, Country and Shamrock discuss shares as they tail CO Tilghman. Country asks why Stringer is selling his shares in phone companies and Stringer tells him that he saw Poot Carr with two phones — a sure sign that the market is saturated. Later, Tilghman meets with Butchie and they place bets on his dog catching rats. Afterwards, Tilghman buys a package of narcotics from Butchie. Country and Shamrock watch him receive the package and make the connection. On Avon's orders, Stringer contacts Butchie and asks him to supply Tilghman with a bad package the next time he comes to him for narcotics. Butchie is reluctant but agrees when Stringer uses Avon's name and promises compensation. Shamrock sits in Butchie’s bar as Tilghman picks up the package.

D'Angelo is taking drugs to get through his long prison sentence. He is also trading comics and working in the prison library with an inmate. Avon Barksdale visits D'Angelo and convinces him to lay off of the drugs for a few days. He tells him there may be a way to shave some years from their sentences.

Tilghman smuggles the package into the prison. D'Angelo honors his promise to stay clean, but several other inmates die from the poisoned cocaine. As prison staff rush the inmates away on stretchers, Avon calmly listens to music.[1][2][3]

Retrieved from "https://thewire.fandom.com/wiki/Hot_Shots?oldid=13554"
Community content is available under CC-BY-SA unless otherwise noted.