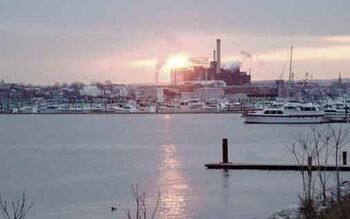 The title refers to the fourteen homicides for Bunk; and Beadie, Freamon, and McNulty's attempt to identify one of the dead women.

Greggs makes this statement about her inability to return to investigative work without becoming fully involved.

Detectives Bunk Moreland and Lester Freamon meet with Colonel William Rawls to discuss their progress. They tell him they need to look into how goods move through the port to understand what was happening with the container. Rawls tells them they should have held the ship in the docks and that they are his scapegoats if their investigation is not fruitful.

The detectives make their way to the docks anyway and try to get Thomas "Horseface" Pakusa to tell them more about the container. He hides behind his union representation and refuses to accompany them to their offices. Later, Beadie Russell shows them Delores' bar and they hassle both Horseface and Frank Sobotka. Frank is terrified of this new attention from law enforcement and vomits in the bathroom.

Officer Jimmy McNulty continues to try to identify the girls. He uses the photo he matched to the girl he pulled from the harbour to identify her clothes in the evidence. He discovers a letter amongst them and has a foreign national translate it for him. He learns the girl's first name and a little about her family.

Acting Commissioner Ervin Burrell meets with Lieutenant Cedric Daniels and offers him the command of the detail to stay with the department. Daniels sees through Burrell's bluster about needing a capable investigator and realizes that Major Valchek has asked for him by name. Seeing an opportunity, he demands a promotion, his own major case unit if the investigation is successful, and the chance to pick his own people for the detail.

He meets with Kima Greggs and persuades her to join the detail despite Cheryl's desire for her to work a desk job. Cheryl and Kima's differences are brought to the fore when they are stuck behind a car of drunk adolescents and Kima cannot fight her impulse to arrest one of them. Daniels and Marla also have different outlooks on the detail's merits, and she storms out of dinner after he tells her about it. Kima gets the same reaction from Cheryl. Before agreeing to join the detail, Kima joked "I'll tell your wife if you tell mine," referring to the protest that their respective partners would certainly have when told about the detail assignment.

Colonel Rawls allows Daniels to take all of his choices except for McNulty. Rawls is still hateful of McNulty's acts of disloyal and insubordinate behavior during the Barksdale investigation demanding that McNulty drowns or quits as his only options for leaving the marine unit. Rawls comments that Daniels must be desperate to get out of evidence control to take a case involving the rivalry between Valchek and Sobotka. Daniels later meets with Valchek and he explains his premise for the investigation and drives him to the facility. Valchek also thanks Daniels for his mentoring of Prez and then describes the I.B.S. workers they are investigating as dishonest thieves. Thomas "Herc" Hauk and Greggs accompany them and are reunited with Roland "Prez" Pryzbylewski. Valchek offers anyone from the Southeastern to Daniels and Herc reminds him that Carver is now there.

McNulty is still getting pressure from Bunk and ASA Ilene Nathan to find Omar Little as a witness for the Marquis "Bird" Hilton trial. He spends a day cruising the West Baltimore streets, but the best he can come up with is Bubbles and Johnny shoplifting. He tells them they must pay a tax: find Omar for him.

Bubbles and Johnny later get stoned in a crack house and ask around about Omar. Kimmy, one of Omar's new crew, is also there asking about their next target and overhears Bubbles's inquiries. Omar catches up with Bubbles on the street as he steals scrap metal.

Stringer Bell meets with Cherry, the manager of his cut house. They discuss the poor quality of their latest package from Atlanta and Stringer orders Cherry to dilute it regardless.

The aftermath of the deaths from CO Tilghman's bad package sparks an investigation in the prison. Officer Reynolds suggests that they will likely get informants if they offer to shave years from prisoners' sentences. Avon Barksdale tries to convince D'Angelo to use the situation to their advantage and reduce their sentences. D'Angelo refuses to believe that Avon had nothing to do with the deaths of the inmates and tells his uncle that he no longer wants anything to do with his business.

Avon works with Maurice Levy, his attorney, to negotiate a reduction of his time until his first parole hearing to one year in exchange for information about the deaths. Despite the investigator's suspicion that Avon was directly involved and responsible for the bad package, they agree to his deal. Once the deal is in place, he informs on Tilghman and the investigators discover the narcotics that Stringer had planted in Tilghman's car.

Nick Sobotka meets with his uncle Frank at the harbor at his behest. Frank knows that Nick stole the truck-load of cameras. Frank demands that Nick return the cameras, but Nick cannot because they have already been fenced. Frank and Nick argue about Frank's own illegal activities and Frank reminds his nephew that he is using the money he makes to save the dock industry.

Nick delivers his cousin Ziggy Sobotka's share to him at Delores's bar. He warns him not to flash the money around and lets Ziggy know that his father (Frank) knows they stole the truck. Nick spends the night with Aimee, but asks her to leave through the back so that his "decent" parents do not find out.

Ziggy cannot control his spending and buys a two thousand dollar leather coat. Nick and Ziggy meet with George "Double G" Glekas again and he asks them to acquire chemicals for him. Ziggy takes the list to Johnny Fifty, their connection in the checkers, and he points them to a contact in another area. Ziggy is accosted by Maui, another checker, as he leaves, who castigates him for stealing from the docks. Ziggy later gets his revenge by littering Maui's computer terminal with photographs of his genitals. Frank catches up with his son, cuffs him on the head, and sends him home.

Nick tells Aimee that he has come into some back pay and suggests they look to buy a property in the neighborhood. He also talks to his mother having had a successful day's employment at the docks and goes to bring his father home for dinner. His father retired from the shipyards when they closed, and now spends much of his time drinking at the local pub.[1][2][3]

Retrieved from "https://thewire.fandom.com/wiki/Hard_Cases?oldid=13555"
Community content is available under CC-BY-SA unless otherwise noted.