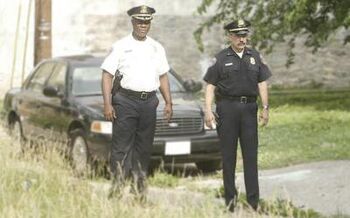 "Hamsterdam" is the fourth episode of the third season of The Wire. It is the twenty-ninth episode of the series overall. It premiered on October 10, 2004. The episode was written by George Pelecanos and directed by Ernest Dickerson.

Officers Hauk and Colicchio use Amsterdam, a city with liberal drug laws, to explain the legalized drug zones. One of the young dealers mispronounces the city as "Hamsterdam", which later becomes the name of one of the zones.

"Why you got to go and fuck with the program?"
―Fruit

Fruit makes this remark after Colvin attempts to move Fruit's crew to one of the legalized drug zones.

Councilman Carcetti has dinner with some friends and announces his intention to run for mayor. He notices Theresa D'Agostino, a political consultant he knows from law school, walk in. He makes a bet with his friends that he can successfully approach her. When he does talk with her he courts her interest in becoming his campaign manager but she tells him he has little chance of success.

Detective Moreland interviews drug dealers in the Western district that have been rounded up by the Drug Enforcement Unit. He tells them they can have a free pass in exchange for information on the gun. Bunk returns with no leads and Sergeant Landsman catches up with him. Bunk meets with Detective McNulty at a bar to discuss locating Omar Little to help with the murders of Tank and Tosha Mitchell. Bunk pretends his mother has died to attract a woman. Later, McNulty visits ASA Pearlman's house and notices Lieutenant Daniels's car parked outside.

Major Colvin attends a town hall meeting in his district. When the residents vent their frustrations on the community relation sergeant, Colvin steps in and tells them he doesn't have answers to their questions. Colvin, furthermore, admits anything they have done has failed and any of the old strategies will still leave the residents at the mercy of the drug war. The residents of the district are surprised and somewhat happy that a police commander was actually honest with them. Carcetti and Marla Daniels are in attendance. Carcetti introduces himself to Daniels and remarks that Colvin's speech was like pouring gasoline on a fire. As Colvin leaves Lieutenant Mello asks what he was thinking with his speech.

Colvin later meets with the head of security and a director of Johns Hopkins university to discuss moving into a deputy security job there following his retirement. Colvin is initially feeling out of place at Hopkins as he is not used to being around the well-to-do academic types. The security director there a former Baltimore Police Department officer reassures him that Hopkins is a perfect place to work security after retiring from the department. The two of them joke about the quiet and crime free affluent atmosphere among Hopkins students and faculty members.

Along with the rest of the Western District, Sergeant Carver's squad crack down on the drug dealing crews trying to move them over to the new free zones. They arrest a dealer named Peanut-Butter and Jelly for dropping vials. The dealers are deaf to their orders and continue to trade on their corners. Colvin decides to order buses to round up the drug dealers on discussing the problem with Mello. Once Colvin has the young drug dealers in the school gym he tries to inform them of the free zones. The dealers are uncontrollable until the principal takes over the microphone. Once she leaves Colvin finds them once more unwilling to listen.

Cutty continues to work landscaping. On his way to a job, he sees a car being driven by young drug dealers. He learns from his employer that all of the other workers are on parole and that the supervisor is an ex-convict himself. The supervisor tells him that every day is hard work for little reward.

He tries the number that Shamrock gave him for work but it is disconnected. He tracks Slim Charles down to Bodie and Poot's shared corner and approaches him. Bodie is hostile towards Cutty until he reveals that he knew Bodie's brother, James Broadus, from boxing before he was imprisoned. Bodie tells Cutty that James is dead. Slim Charles asks what kind of work Cutty is looking for and he offers himself for anything that pays. The soldiers leave to find a weapon for Cutty as Colvin's buses begin rounding up corner dealers.

Stringer Bell meets with Andy Krawczyk, his property consultant, and State Senator Davis. They discuss Stringer's property in up and coming areas and developing them as residences. McNulty continues to follow him. Stringer finally meets with Donette when he learns that McNulty had been to see her. Stringer reassures Donette that Avon's name would have been enough to protect D'Angelo and tells her that he doesn't want to keep her at arms length any more. Shamrock picks Stringer up and he has two instructions for him - he is to handle the receipts from their man Bernard buying disposable cell phones for them and if Donette calls he will take the call.

Maurice Levy guides his client Avon Barksdale through his parole hearing due to the deal he made during his sentence, despite Pearlman's letter to the parole board.

Gerard, Sapper, Slim Charles, and Cutty survey one of their dealers who has been short on his count. Cutty suggests that if the dealer has a girlfriend she is likely where his money is being spent. Later, Bodie hosts a party to celebrate Cutty's return. Shamrock and Slim Charles accompany them and the party is packed with women and drugs. Cutty comments that he is surprised that Avon lets them get high and Bodie remarks that sometimes they have to. Bodie has organized some women especially for Cutty.

McNulty and Detective Greggs want their informant Bubbles to check the lay of the land in the Western District particularly where the Barksdale crew are now working. They offer him $5 an hour or $30 for a days work. Over the course of his day Bubbles observes Marlo talking to Fruit and memorizes his plate number.

When McNulty and Greggs checks in to the detail office, Freamon quizzes them about where they have been. Freamon tells McNulty he owes Lieutenant Daniels some loyalty after all he has done for him. McNulty tells Freamon that he is not real police and McNulty seems ready to start a fight. Freamon tells McNulty that his self-destructive streak is all consuming. Greggs breaks the two up and Freamon turns on her saying that Daniels brought her up in the job.

Bubbles reports that the Barksdale organization is sharing territory for the most part but that Marlo has the lower avenue corners and the po homes nearer to the city all to himself. He gives Marlo's plate number over for a little more cash. When they run the plate number at the detail office they find that it is registered to an older woman across town. Greggs checks the name and finds that Marlo Stanfield is 22 and has a record.

Greggs visits the Homicide Unit to question Detective Holley about Marlo's previous investigation. Marlo was up for a murder charge but escaped conviction by killing a witness named Pooh-Bear despite Holley's efforts to protect him. Holley describes Stanfield as pure evil.

Daniels visits ASA Pearlman at her office with little to say. She gives him some bad news - Avon is up for parole. McNulty goes to his son's science fair and Elena asks him about his alimony payments.

The next day Greggs reports to McNulty that Marlo is a killer and theorizes that he may be working for Stringer. Greggs spends the day with Bubbles mapping out the territories of the drug dealers. She learns that the dealers are using "burners" (disposable phones).

McNulty goes to the college where Stringer is attending economics class to get details for him. He matches the cell phone number from the records to Stringer by following him after class. Stringer answers the phone using the name of his front organization B&B. Riled by his confrontation with McNulty, Freamon has Detective Pryzbylewski checking property purchasing records for the same business.

McNulty reports his results to the rest of the unit. Freamon once again impresses McNulty by having the number he obtained for Stringer from Prez's record search and as well as telling them he has been using a legitimate cell phone as well as having property in his own name. Greggs brings up the disposable pay phones, McNulty worries about how they can wiretap these phones. Freamon and Prez have learned that Stringer is working as a property developer. Freamon tells McNulty he will stop covering for him soon and he needs to swallow his pride and return to the unit.

Daniels has an awkward drink with McNulty and they discuss Daniels new relationship with Pearlman. McNulty tells him that he wishes them all the best and Daniels thanks him for making it easy.[1][2]

Retrieved from "https://thewire.fandom.com/wiki/Hamsterdam?oldid=14618"
Community content is available under CC-BY-SA unless otherwise noted.