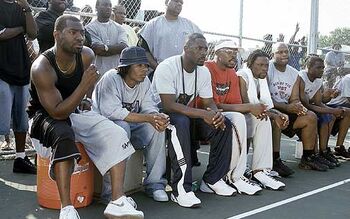 Freamon gets Sydnor and Prez started on the Barksdale money trail. Omar gives East Side kingpin Proposition Joe a stolen package for the opportunity to parlay with him. Avon and Proposition Joe host an East versus West Baltimore basketball game, providing the detail's detectives the first glimpse of their elusive target. Omar attempts to kill Avon, but is himself wounded.

The title refers to the annual basketball game between East and West Baltimore.

Herc makes this dry comment after he and Carver are unable to find any narcotics dealers in West Baltimore, as they are attending the basketball game. Herc's remark is also a callback to Carver's earlier observation that "wars end". ("The Target")

The Street Stringer Bell and Avon Barksdale visit a gym to arrange a high school athlete to play for them at an upcoming Eastside/Westside basketball game. After their negotiations, they discuss the hunt for Omar Little. Stringer wants to let it lie until Omar re-emerges, but Avon is adamant that they need to kill Omar for their reputation's sake. Meanwhile in the projects, Wallace tells D'Angelo that he doesn't want to work anymore because of the Omar heist and the deaths of Brandon and Stinkum. D'Angelo gives him his blessing to return to school and hands him some cash as well. Poot later goes looking for Wallace and finds him buying drugs.

Bubbles and Johnny spot Walon, the speaker from their Narcotics Anonymous meeting, but are distracted by Bodie throwing out free vials of new product. Bubbles approaches Walon afterwards and learns that he is still clean, but has come to the projects to try to convince his nephew to go straight. Bubbles is inspired enough to go and visit his sister and persuades her that he is serious about getting off of drugs. She gives him a key so that he can use her basement to get clean.

At the basketball game, Avon mocks Proposition Joe's attempt to dress like a real coach, complete with an unused clipboard. Poot and Bodie explain the game to Herc and Carver: the loser has to throw a party for both crews. Carver and Herc try to identify Avon, but have no idea who they are looking for. Sydnor arrives and recognizes Avon straight away from his old boxing photo. Proposition Joe hustles Avon midway through the game by going double or quits, after which the East side make a winning comeback with the help of a ringer. Avon is furious.

Omar continues stalking the projects looking for a way to get to Avon. He eventually makes his way to Proposition Joe's place and delivers some of his takings from the Barksdale's stash. He offers it in exchange for Avon's pager number. Omar tracks Avon down to Orlando's and gets him to answer a page using Wee-Bey's code. Wee-Bey pulls up and Avon realises that something is amiss. He dives out of the way just as Omar opens fire. Wee-Bey and Omar exchange shots and Wee-Bey wings Omar, who makes a retreat.[1][2][3]

The Barksdale detail's surveillance work continues with Thomas "Herc" Hauk and Ellis Carver on the scene and Lester Freamon, Leander Sydnor, and Roland "Prez" Pryzbylewski back at the office. They intercept a call and learn that soldier Wee-Bey Brice is going to be moving some money. Herc and Carver intercept him and take the money, telling him he can get it from the State's Attorney if he can explain where it came from. They discuss keeping some, but Carver decides it would not be worth the hassle with the wire running, as the real amount of cash taken might get back to their bosses and expose the theft. They deliver the money back to the office and listen in on a call Poot makes to his girlfriend. After ten minutes of phone sex, they hear something pertinent. Jimmy McNulty and Prez both remind them they cannot use the call as evidence without justifying it. Later, Lieutenant Daniels finds the money short and tells Herc and Carver to find it. They bicker, each suspecting the other, but when it turns up in their car, Carver apologises to Herc.

Tension is building between McNulty and Daniels. When McNulty remarks they need to extend the tap, Daniels responds angrily. Freamon backs Daniels up when McNulty complains, saying that he is in a difficult position between his men and the bosses. Freamon instructs Sydnor and Prez in tracking the money the crew is making. He follows his own advice and gets records of campaign contributions from city hall, turning up massive contributions to various politicians from the Barksdales. The details' efforts also return details of Barksdale's front organizations, including a funeral parlour, a strip club, and several warehouses.

Kima Greggs and Freamon pick up Shardene Innes, a dancer from Orlando's, the Barksdale strip club and front. They take her to identify the body of Keisha, a friend of hers from the club. They start trying to persuade her to act as an informant for their case. Shardene agrees and moves out of D'Angelo's apartment. When he asks her for a reason, she hints that she knows what happened with Keisha.

Retrieved from "https://thewire.fandom.com/wiki/Game_Day?oldid=12707"
Community content is available under CC-BY-SA unless otherwise noted.