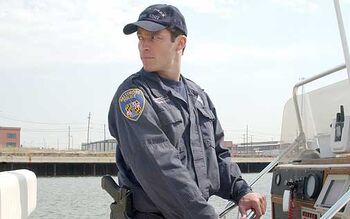 "Ebb Tide" is the first episode of the second season of The Wire. It is the fourteenth episode of the series overall. It premiered on June 1, 2003. The episode was written by David Simon and directed by Ed Bianchi.

The title refers to a type of tide in the Baltimore harbor.

"Ain't never gonna be what it was."
―Little Big Roy

Little Big Roy referring to the ports and their place in the chain. It also refers to the working classes power as a whole, being forced down by capitalism and political entities for their own gain.

Officer Jimmy McNulty continues his new job with the Baltimore police department marine unit and complains to his new partner Claude Diggins about the cold. They are called to a ship with engine trouble that is hosting a party. The party organiser bribes McNulty to tow them out of the shipping lanes but not to shore so that they can continue their festivities.

The next day McNulty discovers a corpse in the harbour and identifies it as relatively fresh but notes the broken legs. Ray Cole is the homicide detective who gets the case - he meets McNulty on the shore. McNulty visits his old homicide unit looking for Bunk Moreland. He checks in with Sergeant Landsman and asks if he is to blame for him getting his nightmare assignment in the marine unit. Landsman denies any malicious intent in letting Rawls know about McNulty's aversion to the job. McNulty learns that Cole has missed several key pieces of information about the corpse that he discovered and that homicide commander now-Colonel Rawls has passed the case off to "the County" (Baltimore County, which includes the suburbs but not the city itself) because it was found east of the bridge. McNulty spends his next few hours studying tides and charts of the harbor as he attempts to prove where the body was dumped into the water; he types up a report and faxes it to the County homicide unit. Rawls and Landsman immediately realize McNulty's involvement when the case is passed back to them.

Detective Roland "Prez" Pryzbylewski meets with Major Valchek, his father-in-law, to discuss his career options. Prez wants to stay in narcotics and work cases like the recently finished Barksdale investigation. Valchek wants him to progress through the ranks and have a career in the department, and quickly dismisses Prez's own plans. Valchek's office is filled with newly-delivered stained glass decorations. Valchek plans to have a window installed at the local church that represents the contributions of Baltimore police to the diocese.

In the narcotics unit, Kima Greggs is working her desk job and Detective Thomas "Herc" Hauk has returned to easier street cases following the dissolution of the Barksdale detail. Herc tells Kima that she is "pussy whipped" because she allows her romantic partner, Cheryl, to control her work life. When Kima returns home to Cheryl, they discuss possible fathers for artificial insemination along with Kima's job dissatisfaction.

Homicide detective Bunk Moreland visits McNulty at the docks to ask if he can help him locate witness Omar Little for the trial of Barksdale soldier Marquis "Bird" Hilton for the murder of William Gant. Bunk later goes to the storage basement to retrieve his evidence for the trial. He has a chance meeting with the recently dissolved Barksdale detail's commander Lieutenant Daniels, who is now in charge of the evidence room, and they discuss Bird's upcoming trial. Bunk is dismayed to learn that his evidence has been lost. Daniels insists that the entire basement be pulled apart to locate the evidence. That evening, Bunk meets with McNulty in a bar and again asks him for help locating Omar, but to no avail.

Stevedores' Union Secretary Treasurer Frank Sobotka meets with another union leader, Nat Coxson, who is angry that the Baltimore granary pier is still in a state of disrepair. Frank is disparaged by his colleagues, including Thomas "Horseface" Pakusa and Ott, for taking the verbal abuse, but he laughs it off. Frank meets with his nephew Nick Sobotka and learns he is working for the first time in two weeks; Frank tells Nick to see someone named The Greek about a container they have coming in. He hears from another worker, La La, that another dockworker Ziggy has lost a container. Frank tells Ziggy that he is fired, but this is revealed to be for show as Ziggy is Frank's son.

Frank later visits a church where he sees the finished installation of his recently-donated stained glass window depicting a dockworker scene, imported from Germany. He requests that the priest, Father Lewandowski, set up a meeting with Senator Barbara Mikulski for him to discuss the difficulties at the docks. Major Valchek delivers his own window to the church on behalf of Polish police officers and is angry that the dock union was given the location in the church that was originally reserved for the Police Department.

Later, the rest of the stevedores drink heavily and the senior members, including Moonshot, Chess, and Little Big Roy, riotously discuss days gone by. Ziggy organizes a rebuke from younger stevedores Nick, Johnny Fifty, and Big Roy. Ziggy is the center of attention, exposing his genitals while standing on a table, until the Nighthawks begin to play.

Nick is awoken in his parents basement by his mother banging on the ceiling. She chastises him for getting up late when a ship is due. Ziggy sleeps on the sofa. Nick walks out to meet with the Greeks and bumps into his friend Johnny Fifty. As Johnny and Nick bemoan the lack of work for younger stevedores, Ziggy catches up with them. Nick reluctantly lets Ziggy drive out to his meeting with "The Greek". Ziggy embarrasses Nick by talking too much and offending Sergei, a Ukrainian driver, by calling him "Boris." Nick's meeting is about a container that The Greek wants Sergei to drive away from the docks for him. Nick reports back to Frank and Horseface with the details and informs Frank their cut will be the same. As Nick is arriving, the local dock police officer Beadie Russell jovially asks him what he is stealing today. Later, Frank and Horseface are dismayed when Sergei leaves the container sitting on the dock for several hours. When they insist he get on with things, Sergei drives away. Frank orders the container moved back into the stack.

Later, Officer Russell stumbles across the Greek's container and notices the broken customs seal. She crawls inside and finds the bodies of over a dozen young women in a hidden compartment in the back. The stevedores gather around as the police arrive. Frank is shocked to learn that there were women in the container.

Bodie Broadus drives out to Philadelphia with another Barksdale drug dealer named Shamrock. He collects a car from a parking garage and drives it to another side street garage where it is stripped down. Bodie is enraged when the car is devoid of any narcotics and he worries over calling his superiors to let them know. Stringer Bell, leader of the organization while Avon Barksdale is imprisoned, orders them to return to Baltimore and report to the funeral home. Stringer checks that Bodie and Shamrock stuck to their assigned times and recorded their mileage. He also quizzes them separately to see if there was an opportunity for either one of them to steal anything. Finally he reveals that he had them followed the whole trip by Tank and a newly returned soldier called Country. Bodie is later seen running his own drug dealing crew on a corner much like D'Angelo Barksdale used to. Bodie checks his count and discusses his resupply from a dealer named Mo Man with his second, Puddin.

Stringer visits Avon in prison and they discuss a delivery connection with New York named Roberto. It is this connection who failed to deliver the product they sent Bodie to collect. Stringer's surveillance allowed him to check the integrity of his people, so he has identified the source of the problem as New York. Avon counsels that he must be firm when he demands their product. Stringer asks how he is managing with his sentence and Avon tells him he only really serves two days: the day he went in and the day he is released. Stringer later meets with a contact in New York and learns that Roberto has been arrested. He is assured that his funds are being returned to him, but the New York suppliers no longer feel safe dealing with him because Avon's arrest and mild sentence raise concerns that he may be a police informant.[1][2][3]