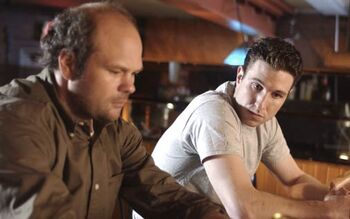 "Duck and Cover" is the eighth episode of the second season of The Wire. It premiered on July 20, 2003. The episode was written by George Pelecanos and directed by Dan Attias.

The title refers in part to Ziggy's pet duck. It also refers to Frank's realization that the docks are under surveillance and to the coverup measures he has to take.

"How come they don't fly away?"
―Ziggy

Ziggy's question as to why ducks don't leave their cages when they are free to do so. The reason being that their wings are clipped. A metaphor for many of the groups in The Wire, and the individuals that find themselves in some way caged - the stevedores, the illegal immigrants, the police.

Jimmy McNulty deals with the disappointment of his failed reconciliation with his wife by returning to his old drinking habits. He gets drunk and tries to drive home from the bar. When he crashes into a bridge abutment while turning a corner he refuses to believe he misjudged the turn, reverses back and hits it again. He ends up in a diner and goes home with his waitress.

He spends another evening drinking with Bunk Moreland at the train yard. He asks about the detail and admits wanting to work with them again. He can't express his feelings but seems to want to say without a case to work or his family he is worthless.

The detail meets with Assistant States Attorney Rhonda Pearlman and they give her a report on their case to date. Their investigation of phone logs from George "Double G" Glekas' warehouse links to "White" Mike McArdle, Petey Dixon and Proposition Joe. Kima Greggs' photos confirm the link. They have identified Sergei "Serge" Malatov and tracked his cell phone through his truck rental paperwork. His phone records show that he calls the warehouse every day that a container goes missing.

Lieutenant Cedric Daniels introduces Thomas "Herc" Hauk and Ellis Carver's linking of Nick Sobotka to the drug dealer Frog, which they have falsely reported as being obtained from an informant. Pearlman admits there is probable cause for wiretaps on Sergei's cell phone and the warehouse phone and checks their efforts to prove exhaustion. Pearlman checks over their paper work and takes it to the duty judge. The judge signs off on the request but has Herc and Carver move and install an air conditioner and wash his windows in exchange.

Lester Freamon and Bunk appeal to Daniels to help McNulty by going back to Colonel William Rawls. Rawls again tells Daniels no on McNulty's transfer. Daniels then brings up his agreement to take on investigating the murders and Rawls capitulates based on the hope that Daniels can clear his homicides. Daniels calls McNulty to let him know he is back.

Herc gets his cousin Bernard to pose for photos as their fake informant, Fuzzy Dunlop. Bernard insists on 10% of the CI payments. Carver hands the paperwork to Daniels who balks at the name and high price but signs it anyway.

Pearlman meets with Greggs and Bunk to discuss how to proceed with the investigation of the vice aspect of the smuggling. They tell her that they have found that the same company owns the warehouse and the apartments. They speculate that the apartments are being used as a cat house. They decide they need someone to go undercover to infiltrate the apartment. McNulty reports for duty and seems the obvious choice.

Greggs and McNulty set up surveillance of the parking garage at the apartment building. They pull over one of the Johns and get him to explain how to contact the madam. They also note the girls being driven in via panel truck.

Beadie Russell, Roland "Prez" Pryzbylewski and Freamon notice another potential container theft from the docks - a Transco lines ship with Thomas "Horseface" Pakusa working as checker. This time the surveillance work runs in combination with the wiretaps and track the container to the warehouse. When Frank Sobotka sends out a second (clean) container McNulty rushes to tail it and Russell organises a stop to slow it down.

The stevedores continue to persuade Ziggy Sobotka to retaliate against Maui's taunting. When he eventually does Maui easily bests him and strands him on top of a container. Ziggy calls down to the other stevedores "you gave me bad advice." Horseface reports the fight to Frank Sobotka. Sobotka is more worried about their finances at the end of the month. He goes to pay his cell phone bill but learns that his account is flagged so he was not going to be cut off. He also spots Greggs on the docks when she is posing as an engineer to watch the smuggling operation. His suspicions are raised enough to ask after Beatrice Russell and learns she lied when she told him she was transferring to Fairfield. The other port authority officers tell him she is detailed to the Baltimore City police. He decides to send out a clean container to test the water. Sobotka notices the container being stopped and goes to call the Greek but realises his cell phone is unsafe. He uses the untapped office phone to set up a meeting with The Greek.

Frank meets with his brother Louis and offers him a position with the port advisory board. Louis refuses the offer saying it's not for him. He insists that everything he has comes straight. Frank tries to claim the only difference between them is that he chose the right union but Louis disagrees.

Ziggy buys a duck from a neighborhood man who keeps birds. He meets with his cousin Nick and admires his new car. Nick asks him about his fight with Maui and can't hide his amusement. Ziggy takes the duck to Delores' bar and entertains the other stevedores.

At the warehouse George "Double G" Glekas and Sergei unload the clean container and angrily phone Spiros Vondas at the cafe. The detail trace the call and recognise it was the same number that Frank dialed. Vondas instructs Sergei to dump the container and McNulty follows it far enough to make sure but is then recalled by Daniels.

Frank drinks with Nick and discusses their problems with the investigation, he asks him to accompany him to the meeting. The Greek is impressed by Frank's suspicions and suggests they only move clean containers for a while. Nick and Frank insist that they are still paid for moving the containers and The Greek agrees to their terms because he expects them to continue to do good business in the future.

The detail interpret the non-contraband container as a mistake and Freamon is pleased to have the number of Vondas's phone. McNulty and Beadie go for a drink and discuss their past relationships. McNulty drives her because her car is in need of repair. While at the bar McNulty calls the number for the madam and sets up an appointment. McNulty has another drink at Beadie's home but leaves quickly when he sees pictures of her children.

Bodie Broadus and Poot Carr walk through their territory bemoaning the lack of trade because of their weak product. Puddin has a similar story from the towers. Later they notice an independent crew dealing on their territory with far more success than they have been getting.

Bodie and Poot organize a crew to strike back against the dealers on their territory. They make an early start and beat them to their corner. When the other crew arrive they successfully drive them away but expect retaliation.[1][2][3]