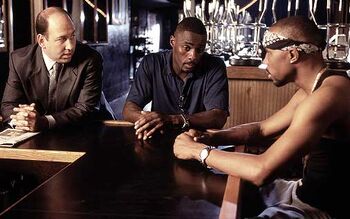 The epigraph is spoken by Wallace as he discusses his return to "the pit" with D'Angelo, explaining why he can not stay in the country, and why he can't move to another part of Baltimore as everything that he is has been molded into his part of the drug dealing institution of "the pit" meaning that he is stuck in the life the institution forced him into.

Stringer Bell visits the low-rise projects and collects the whole crew's pagers (including D'Angelo Barksdale, Bodie Broadus, Poot Carr, Manny, Cass and Sterling). He gives mobile phones and three numbers to Bodie and D'Angelo, instructing them that they can use the phones to organize meetings, but that all business talk will now be conducted face to face.

Avon Barksdale and Stringer meet with their lawyer Maurice Levy. Levy tells them they need to clean up now that they know they are being investigated. He tells them to walk away from Orlando's club, as he probably told the police about it before he died. Levy asks when the trouble started, and Stringer suggests that it was around the time of D'Angelo's trial. Levy suggests that Nakeesha Lyles may be a problem. After Levy departs, Stringer convinces Avon to insulate himself from their crew by passing all communication through him.

D'Angelo meets with Stringer and Avon at the club. Stringer asks him about Wallace and D'Angelo tells them that he has left "the game". D'Angelo appeals to Avon to leave Wallace alone and then leaves. Back at the pit, Wallace returns from the country and asks for his old position back. Bodie tells Wallace that he would have to accept a demotion, but D'Angelo overrules him. D'Angelo takes Wallace aside and gives him advice on how to handle his return. D'Angelo's mother Brianna arrives with a lunch for him.

Cedric Daniels visits his wounded detective, Kima Greggs, and bumps into a drunken Jimmy McNulty outside of her room. He tells McNulty to go in and see Greggs or go back to work. McNulty confesses that he is racked with guilt over his role in starting the investigation in which Greggs was shot. He says that the case does not mean anything. Daniels tells him that the case meant something to Greggs and that they must continue their work and find her shooters.

McNulty arrives at the detail office as Lester Freamon fits Shardene Innes with contact lenses. Freamon tells McNulty that their surveillance is faltering because the Barksdale organization is changing their operating procedure. He has sent Prez out of town chasing the paper trail. Freamon suggests that they have Shardene wear a wire into Avon's club.

Daniels meets with Deputy Commissioner Burrell and Major Bobby Reed to discuss his investigation. Burrell feels that the case is over now that the wiretaps have gone dead. Daniels argues that they still have time remaining on the court order, so they should keep up the surveillance. Burrell tells Daniels that he will not need so many men and orders Daniels to return detectives Santangelo and Sydnor, but allows him to keep Freamon and Prez. Daniels is satisfied with this, as both men he keeps have proved valuable to him over the course of the investigation.

ASA Rhonda Pearlman meets with the State's Attorney, who is worried about the Barksdale investigation looking into campaign donations. He gives Pearlman evidence of returned contributions from unknown sources from his own offices to hand over to the detail. Pearlman is distressed that her investigation is worrying her superiors, as this reflects poorly on her, and she denies any knowledge of the detail's actions. As the records are public, no one had asked for her assistance.

Shardene attempts to infiltrate the office at the club while wearing a wire, but has little success in obtaining pertinent information. Later that night, beat officers find the body of Nakeesha Lyles. Bunk reports the murder to the Barksdale detail and they realize that Wallace may be in danger. Daniels scrambles to organize his men to locate Wallace. Freamon offers to let Shardene stay at his apartment.

Daniels is called into a meeting with Burrell and Senator Clay Davis. Davis is concerned about the detail looking into his campaign finances and the involvement with his driver. Daniels refuses to apologise for the driver's arrest and tells the senator that if he is clean he has nothing to worry about. Davis tells him that he has no idea where his campaign contributions come from. Daniels leaves the meeting and Davis insists that Burrell needs to control him.

As Daniels arrives back at the office, Herc celebrates the results of his sergeant's exam. Carver was less successful and is away on in-service training. Sydnor phones from the shore to report that Wallace left two days ago. Pearlman arrives at the detail to quiz Daniels about the investigation into campaign donations. Freamon trains Shardene in measuring her steps to map the inside of the club. Prez is quick to interpret her findings, again showing his aptitude for math. Using the measurements, the detail installs a camera in the wall of Avon's office from an adjacent vacant building.

Bodie reports to the towers after getting a call on his new phone. Stringer arrives and asks Bodie about Wallace. Bodie tells him that Wallace has returned. Stringer asks for Bodie's opinion of Wallace and Bodie tells him that Wallace is weak. Finally, Stringer orders Bodie to kill Wallace and checks that he has a gun. As Bodie leaves, Stringer calls him a soldier. After Bodie tells Poot about his task, Poot insists that Wallace is using narcotics and therefore not an informant. Bodie counters that if Wallace is using, then he is unreliable and has to go anyway. Finally, Bodie concludes that if they do not carry out Stringer's orders they would be out of the business, and Wallace's death is part of "the game".

McNulty and Daniels visit Wallace's old squat, but find it abandoned and devoid of the extension cables he was using to steal electiricity. McNulty finds an address for Wallace's mother, Darcia Wallace, and he takes Daniels there to see if she knows his whereabouts. She is little help and is more concerned about her next drink than her son being in danger.

Wallace brings Chinese takeout for the young children he looks after. Later he goes out for a meal with Bodie and Poot. When they return home, the children have all left. Bodie and Poot corner Wallace in his bedroom and Bodie draws his weapon. He steels himself to shoot Wallace as he pleads for his life, but is unable to do so until prompted by Poot. After the first shot, Poot takes the weapon and finishes the task.

The next day, Avon arrives to clear his office at Orlando's, and the detail is frustrated at once more being a step behind. Poot has his girlfriend report a dead animal in Wallace's apartment the next day so that the body will be found. Bunk investigates the scene and recognizes Wallace. Avon meets with D'Angelo as the office is emptied and asks him to drive to New York to receive their next package. He tells D'Angelo he wants him to do it because he is family and he feels he can trust him. With this information, Daniels and McNulty borrow a tracking device from the FBI and install it on D'Angelo's car as he changes his clothes.

D'Angelo is stopped by traffic police and then brought in by the detail. McNulty and Daniels interrogate him without a lawyer. D'Angelo is wary, having been tricked by McNulty before. McNulty tells D'Angelo that Wallace is dead and he does not believe him.

Brianna berates Avon for letting D'Angelo get arrested. Stringer and Levy visit D'Angelo and he asks about Wallace. Stringer cannot answer him and D'Angelo becomes enraged when he realizes McNulty was telling the truth. He refuses to let Levy represent him.

Daniels meets with Burrell to discuss this new development. Burrell suggests that this arrest is sufficient and that the case is over. Daniels thinks that D'Angelo will give them more if pressured. Burrell questions the relevance of Daniels men looking into campaign finance and then threatens him with the FBI's report on his excess capital. Daniels refuses to back down and insists that he will continue with the case as long as he has time on the wiretap affidavit. He threatens Burrell, willing to go down for the Eastern District allegations claiming that it will eventually happen anyway, but will reflect with bad press, something according to Daniels that Burrell is most afraid of.

McNulty and Daniels watch the SWAT team prepare to arrest Avon. McNulty tells Daniels that they should make the arrest, and they go in together. Daniels cuffs Avon but McNulty lets Stringer go, telling him they will catch him later. At the office, Freamon, Prez, and Sydnor review the board. Freamon adds a newspaper article about a rehabilitation centre being built in an area where the Barksdale organization has been amassing property. Sydnor tells them the case is the best work he has ever done, but he still feels that it is not finished. At the low rises, the dealers' orange sofa stands unused.[1][2][3]