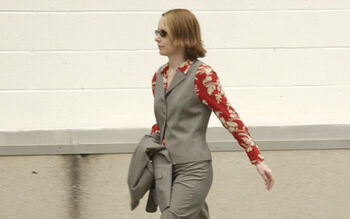 "Bad Dreams" is the eleventh episode of the second season of The Wire. It is the twenty-fourth episode of the series overall. It premiered on August 17, 2003. The episode was written by George Pelecanos and directed by Ernest Dickerson.

The title refers to the way that Frank's hopes to rejuvenate the docks by coming involved with crime have had dire consequences for him and his family.

"I need to get clean."
―Sobotka

Frank Sobotka while talking with his lawyers after his arrest. To get clean is to wash the blood off his hands that he never expected or wanted caused by a desire to simply keep his people at the port able to work properly and progressively. He starts this process by returning to the docks to work a simple hard days labour.

The Sobotka detail serve warrants on the targets of their investigation. Lieutenant Cedric Daniels leads Bunk Moreland, Kima Greggs and Lester Freamon into the Pyramid industries warehouse but the place has been completely stripped of evidence. Greggs finds some cocaine residue in a drain. Freamon and Bunk notice the bloodstain from Glekas' shooting. Beadie Russell finds weapons in Eton Ben-Eleazer's home. Terrence "Fitz" Fitzhugh and Jimmy McNulty have a tough time subduing Sergei "Serge" Malatov at his home. Thomas "Herc" Hauk and Ellis Carver search Nick Sobotka's home. They find drugs and cash but Aimee is in Nick's room alone; Nick is asleep at Prissy's place. Michael "White Mike" McArdle is arrested by uniform officers and protests his innocence as he is pulled from his home. Major Stanislaus Valchek and FBI supervisor Amanda Reese wait for Frank Sobotka but do not arrest him at home because they want to make it as high profile as possible.

Back at the detail office Daniels and Russell discuss the rationale for leaving Spiros Vondas on the street. Daniels tells Russell that Vondas is reporting to someone above him and by leaving him free they may be able to identify the man in charge. Bunk and Freamon arrive having learned that Glekas is dead and that Frank's son, Ziggy Sobotka, was the murderer. Daniels angrily rings the homicide unit to find out who investigated Glekas' death. Daniels leaves to confront Landsman and orders his people to start the interviews. Carver, Herc, McNulty and Fitz return to the office and Daniels walks by without stopping to talk to them. McNulty reports that the madam, Ilona Petrovna, has also been arrested.

Daniels is outraged that Landsman did not think to contact him and collected only evidence relating to the murder. Landsman apologises for his mistake but it is not enough for Daniels. Daniels then claims that even for a police department that is as backwards as the Baltimore PD, that this incident takes the prize as their investigation has now been severely tampered with.

Sobotka arrives at work and begins to discuss what to do about Ziggy. The FBI storm into the union offices in force. Sobotka and Thomas "Horseface" Pakusa calmly accept their arrests as Valchek gloats. Reese delays taking the captives outside until the press arrive.

Herc and Carver cannot even get a name from Eton. Russell and Greggs receive nothing but abuse from Ilona. McNulty and Fitz also fail to get a name from Sergei and tell him they will call him Boris. The FBI interrogate Sobotka and ask him to give them information to help himself and his union. Sobotka is disgusted by their suggestion that they want to help his dying union. Sobotka's lawyers shepherd him through a detention hearing.

Greggs and McNulty have far more success with White Mike, they play him recordings of his voice discussing violence and drugs and tell him they have extensive evidence that he is a drug dealer. Mike gives up information on Eton and Sergei in exchange for hot dogs and a strawberry soda. Mike ties Sergei to a murder but knows nothing about his superiors.

Daniels meets with his detectives to discuss the interviews. McNulty reports his success with White Mike. Greggs reports that Nick is still at large and Herc and Carver are looking for him. Daniels asks Fitz for help in bringing in Vondas and he tells him that with the union figures arrested federal interest has dissipated.

Bunk and McNulty tail Vondas from his home to a meeting in central Baltimore. Bunk displays his knowledge of men's fashion by identifying the designer of Vondas' suit. Greggs and Russell follow Vondas into a multistory car park and Russell begins her first foot pursuit with some advice from Greggs. Despite her nerves Russell proves up to the task and tails Vondas to a hotel, even noting the number of the room he enters. Bunk and McNulty are impressed with Russell's development into a capable investigator. McNulty photographs Vondas leaving the hotel with his lawyer and gets a chance shot of The Greek as he walks by. When Vondas returns to the parking garage he switches cars and loses Greggs who has been waiting by the car he drove in. The Greek walks by Greggs as she leaves the parking garage, still unknown to his pursuers.

Daniels meets with Pearlman to discuss the case. They have identified Vondas lawyer as Steven Rados and have an address for him because he rented the hotel room, however, they still believe he may be in charge of the smuggling ring. Daniels asks what they can offer White Mike in exchange for his co-operation and Pearlman suggests witness protection seeing as they have the feds involved. Russell asks why Sobotka has not been offered the same thing. Russell suggests that Sobotka would talk if she approached him and Pearlman gives her the Ok. Bunk and McNulty wait for Vondas at his home to no avail. Herc and Carver do the same for Nick.

Nick returns home to find his mother and father cleaning up their house. Neither of them will speak to him at first. Eventually Louis Sobotka tells his son that the police have a warrant for him at the South Eastern district.

As soon as he is released Frank visits Ziggy in prison, Ziggy has been beaten by the other inmates. He asks his son to explain what happened and Ziggy says that he was tired of always being a punchline. Frank asks why Ziggy didn't come to him and Ziggy tells him he was too busy with his union business. Ziggy asks if his mother knows he is in prison. Ziggy confesses remorse for shooting the store clerk. Ziggy tells his father they are not the same and Frank assures him that he is a true Sobotka. Ziggy simply tells Frank that he is "fucked" and leaves the room.

Frank meets with his brother Louis. Louis regrets not spending more time looking out for their children. Frank says that he could never control Ziggy and wouldn't have been able to stop him from doing what he did. Louis says he was speaking of Nick. Frank tries to reassure Louis that Nick is only involved in some theft. Louis shows Frank the search warrant and tells him that Nick was involved in drugs. Louis is outraged that Frank did nothing to stop Nick when he was still involved in capers at the docks rather than serious crime like drug dealing. Frank tells Louis that the theft from the docks was always a means to sustain their way of life. Louis tells him that should never justify what they allowed to happen to their sons and leaves Frank alone at the table.

Frank goes into work and Nat Coxson refuses to look at him. Frank borrows Little Big Roy's union card so that he can work a ship while Little Big Roy gets paid for sitting in a bar. He tells the shift supervisor, Phil, that he and Little Big Roy are essentially the same - bald and Polish. The stevedores are bemused by Frank's desire to work but Nat gives a grudgingly respectful nod.

After a hard shift unloading ships Frank meets with his lobbyist, Bruce DiBiago. Bruce tells him that all of their political machinations have been reversed by the arrest - with the FBI involved politicians are afraid to vote for Frank's suggestions because they have accepted money from him. Frank is dismayed and as Bruce leaves he tells him that the problem with their country is that they used to make things but now they just put their hands in the next man's pocket.

Frank gets a visit from Russell at the union hall. She is upset and asks him to come forward as an informant to save himself. She tells him that there are different kinds of wrong and that he is better than those he has gotten involved with.

Russell's appeal is successful and Frank comes in the next day. He asks for lenience for Nick and for Ziggy to be transferred to a safer prison. Pearlman agrees on straight probation for Frank and Nick as long as Frank co-operates fully. Frank agrees with one condition - he will not give up union men. Pearlman asks Frank to return with a lawyer the following day. Freamon asks Frank why he stopped using his cellphone and he tells the detail that he realized it had been flagged.

The Greek meets with Vondas for dinner and Vondas is too worried to eat. They decide to leave Baltimore because the investigation is closing in on them. The Greek asks Vondas to tie up their loose ends. Vondas is reluctant to kill the Sobotkas and suggests they could guarantee their loyalty by offering to help Ziggy. Vondas could persuade the witness to Glekas' shooting to change his story. The Greek realizes that Vondas is fond of Nick in particular and tells him he should have a son of his own.

Vondas meets with an embittered Nick. He convinces Nick that he could help Ziggy and asks him to arrange a meeting with Frank. Nick phones Frank at the union hall as he returns from his session at the detail office. Meanwhile Fitz faxes a record of the meeting in to the FBI headquarters.

Nick relates Vondas' offer of a meeting to Frank. Frank is angry with Nick for getting involved with drugs but has taken on board Louis' criticism and is even more angry with himself. He tells Nick that he is going to talk to the police. When Nick brings up Vondas' offer of help for Ziggy Frank reconsiders. Frank is enraged but decides to take the meeting, putting his son above his dreams for the docks. He refuses to let Nick accompany him, insisting that he will have no further dealings with The Greeks.

As Frank arrives for the meeting The Greek receives word from his inside man in the FBI, Agent Koutris, that Frank has met with the police and agreed to become an informant. As Frank walks towards him The Greek tells Vondas that his way will not work.

Omar Little meets with Stringer Bell at Butchie's bar. Butchie's nephew Heywood provides protection for Omar; Perry is there to act as Stringer's bodyguard. Stringer tells Omar that Brother Mouzone was solely responsible for torturing Brandon in order to build his reputation. Stringer offers to give up Mouzone if Omar will cease his pursuit of the Barksdale organization.

Omar follows Stringer's tip and finds Lamar guarding Brother Mouzone's hotel room. He watches Lamar to learn the coded knock he is using. Omar uses Kimmy, Tosha and a dog to distract Lamar after seeing him watching a dog earlier. Omar knocks out Lamar as he strokes the dog and then shoots Brother Mouzone in the stomach as he answers the door. Omar explains why he is there and Mouzone tells Omar that he is mistaken. Omar believes Mouzone's story and leaves him in the motel room. He phones for an ambulance on his way out.[1][2][3]

Retrieved from "https://thewire.fandom.com/wiki/Bad_Dreams?oldid=13610"
Community content is available under CC-BY-SA unless otherwise noted.