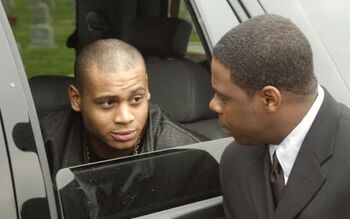 "Backwash" is the seventh episode of the second season of The Wire. It premiered on July 13, 2003. The episode was written by Rafael Alvarez and directed by Thomas J. Wright.

The title is a literary reference to the concept that D'Angelo discusses in the prison book club in "All Prologue".

"Don't worry kid, you're still on the clock."
―Horseface

Horseface makes this statement as recent amputee New Charles is loaded into an ambulance.

When Bunk Moreland and Beadie Russell meet with Sergeant Jay Landsman to discuss using a computer to monitor dock traffic, he is initially outraged but is more accepting when he learns that lieutenant Cedric Daniels has granted them space in his detail's off site. Before storming out he speculates that Daniels might take the cases.

Colonel William Rawls later calls a meeting with Daniels to try to persuade him to take the Jane Doe homicides but Daniels stands firm. Daniels defends his decision to stay with the police department to his wife and tells her he is playing their game from now on.

Kima Greggs and Roland "Prez" Pryzbylewski follow up on the information they got from Shardene Innes' friend and find a whore house. Prez scouts out the area and Kima teases him about it. They get far enough to identify the elevator going to the sixth floor.

Thomas "Herc" Hauk and Ellis Carver purchase a bug because they feel they need to get above street level in their surveillance of the drug trade. Carver is dubious of the cost ($1,250) but Herc persuades the shop keeper to let them have it for a trial period in exchange for the store keeping a credit card. They place the bug in a tennis ball, without the necessary paperwork, and have some success monitoring Frog. However, when Nick Sobotka arrives Frog unwittingly picks up the bug and throws it; Carver tries to chase it into the street but cannot save it.

Lester Freamon and Beadie continue to study the traffic through the docks using their cloned computer. Freamon watches clean checkers at work just to familiarise himself with how things work. When they pick up Thomas "Horseface" Pakusa working a ship, they call in Kima and Prez for help with surveillance. They track the container back to Double G's warehouse and see Sergei Malatov meeting with Proposition Joe — Greggs photographs the encounter.

Bunk, Freamon, and Russell decide they must convince Daniels to take on the murders because he will allow the kind of investigation they feel that they need to run. Freamon makes an impassioned plea to Daniels who later visits Rawls and tells him he will take on the case if he can expect full support from Rawls. He is less successful at selling the idea to his wife; she tells him the thing she first fell in love with was his ambition.

Nick gets further into illegal activity and sets himself up as a supplier to Ziggy Sobotka's dealer contact, Frog. He is unknowingly picked up by Carver and Herc.

Ziggy receives a letter from a law firm claiming he has fathered a child with a notoriously promiscuous local woman. He is despondent and drinks at the bar. He is driven further down when he realizes that Nick is far more successful than him in the drug trade. Nick realizes that the letter should have been served by a notary rather than hand-delivered; he checks the phone number and it phones through to Maui's cell phone. Nick tells Ziggy he has been the victim of a prank. Later, Maui continues to taunt Ziggy with a song from the jukebox and the other Stevedores try to convince Ziggy he could take Maui in a fight.

Frank Sobotka visits a seminar on robotic dock technology and is appalled at the jobs it takes away from the Stevedores. He meets with Nat Coxson back at the union offices and appeals to him to let him extend his term as union leader for another year. The Stevedores have an agreement that rotates white and black leaders from year to year.

Frank meets with his lobbyist, Bruce DiBiago, and is disappointed with his results. He rants about his family's history and its lack of a financially secure future before delivering a box of cash and insisting that Bruce work harder to get the canal dredged.

A dock worker called New Charles is injured while moving freight. His leg is trapped under a box and severely damaged. The Stevedores rush to his aid and he is taken to a hospital but he ends up losing the limb. Frank and Nat visit his family and Frank delivers an envelope stuffed with cash. When Nat asks Frank where the money comes from, he refuses to answer.

Bodie Broadus buys flowers for D'Angelo Barksdale's funeral and orders an arrangement to look like the high rise towers. Stringer Bell visits Brianna Barksdale's house for D'Angelo's viewing and finds her inconsolable. Donette seems more pragmatic about the death. In the prison, Avon Barksdale and Wee-Bey Brice discuss D'Angelo's ‘suicide’. Avon musters enough anger at the selfishness of the act to dismiss D'Angelo as weak.

The funeral is well attended and Bodie's flowers garner compliments. After the ceremony, Proposition Joe discusses sharing his supply with Stringer for a share in the Barksdale organization's profits.[1][2][3]

Retrieved from "https://thewire.fandom.com/wiki/Backwash?oldid=13607"
Community content is available under CC-BY-SA unless otherwise noted.