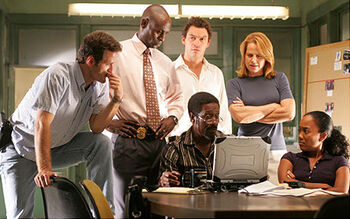 "Back Burners" is the seventh episode of the third season of The Wire. It is the thirty-second episode of the series overall. It premiered on November 7, 2004. The episode was written by Joy Lusco and directed by Tim Van Patten.

The title refers to the disposable cellular phones used by the Barksdale organization. The slang term "put on the back burner" refers to making something less of a priority, or switch focus to something else. The drug dealer Williamson is put on the back burner as Bell and Stanfield are made the new targets and arresting Bodie's crew becomes less important than the Hamsterdam cops-dealers pact. The title can also refer to the "back door" move made on Lieutenant Daniels by Detective McNulty in getting the investigative targets changed.

Butchie uses this phrase when talking to Omar about his problems with Bunk over the death of Tosha.

Omar Little visits Butchie to discuss Bunk Moreland's recent lecture about the loss of morality in their neighborhood. He reveals that he has been feeling guilty, and Butchie says that this is a ploy that Bunk is using against him. Despite Butchie's advice, Omar cannot put his conscience to rest, so he uses Butchie's contacts to locate Officer Dozerman's weapon for Bunk.

Bunk cuts detective Crutchfield's tie as part of a running joke in the homicide unit - detectives sleeping in the offices have their ties cut in half. He gets a call from Butchie and travels to his bar. Butchie gives Bunk the weapon, wrapped in Omar's tie from his court appearance in the Bird trial. Bunk returns the tie and asks Butchie to tell Omar he is hoping he might need the tie in court some day.

Councilman Tommy Carcetti asks Acting Commissioner Ervin Burrell about the witness protection program/lack thereof. Carcetti verifies that Mayor Clarence Royce has not acted on his request to look into the death of a witness, and assures Burrell he will keep his name out of it. Later he meets with Theresa D'Agostino, his new campaign manager, at his home. Terri convinces Carcetti that rather than taking the story of Royce’s inaction to the papers, it is better to meet with him again, and if he still fails to act, he can document his concern in a letter and save the story for a time closer to the primaries or when the next witness is killed. Carcetti, therefore, meets with Royce to discuss starting a witness protection program a second time. Royce claims there is no money available for any such initiative.

Officers Lloyd "Truck" Garrick and Thomas "Herc" Hauk watch over corners in the Western district. Major Howard "Bunny" Colvin and Lieutenant Dennis Mello check up on the level of activity. They are observed by Slim Charles and Avon Barksdale. Slim Charles tells Avon that Marlo Stanfield has withdrawn his operation from all of his corners and Avon orders him to take the corners as soon as the police leave. As they drive away, Herc recognizes Avon but cannot remember his surname and is surprised he is out so quickly.

Colvin discusses his statistics with Mello and the community relations sergeant. Crime is down overall but up near the tolerant zones. Mello thinks this is reason to let the bosses know that what they are doing is working, but Colvin insists that it should be kept a secret.

Bubbles tries to sell his T-shirts in Hamsterdam but finds the area overwhelming even by his standards. He learns that addicts have taken up residence in the vacant buildings and need basic supplies to get by. Bubbles spots Johnny in one of the houses, Johnny is looking worse for wear but refuses to leave. A fight breaks out and the uniformed officers break it up. Herc and Officer Anthony Colicchio refuse to help Sergeant Ellis Carver. Carver tells the hoppers that they are breaking Hamsterdam‘s only rule, no violence, as Bubbles watches.

Carver and Herc take over from Colicchio and Truck on watch in Hamsterdam. Carver remarks that there are too many children, and Colicchio tells Carver that many of them are unemployed as lookouts and runners are not needed if trade is legal. Carver tells the dealers that they have to pay a hundred a week to deal in Hamsterdam with the money going towards supporting the young children. Carver uses the first of the cash to buy a basketball hoop for the children. Colvin visits Hamsterdam at night and Carver tells him he would be ok with it if there weren't so many children around.

Bernard delivers a new batch of disposable phones to Shamrock at the funeral home. Shamrock asks him to acquire 60 more phones by the end of the week. Bernard sticks to Stringer Bell's rules when buying the phones, getting only two from any single outlet. His girlfriend, Squeak, harasses him about the amount of time they spend travelling to buy the phones. Throughout their lengthy roadtrip, she continues to try to convince him to buy the phones in bulk. When they deliver the phones, she notices that Shamrock does not even check the documentation. The next time Bernard makes his rounds, his girlfriend convinces him to buy in bulk.

Donette discusses Brianna with Stringer over dinner at her apartment. Brianna has asked Donette to go with her to the police station to talk to Jimmy McNulty about the death of D'Angelo Barksdale. Stringer is angry that Donette has spoken to Brianna. He asks her when Brianna plans to visit the police and learns that she is waiting to contact a lawyer. Stringer checks in with Maurice Levy and learns that Brianna has contacted him. Levy recommends that they tell Avon, and Stringer says he will handle it.

Slim Charles assigns Poot Carr to one of Marlo's corners with some muscle for protection. Poot is worried about retaliation from Marlo. Later, Stanfield soldier Snoop kills one of the soldiers in a drive-by from a motorcycle and Poot narrowly escapes being shot.

Marlo, Chris Partlow, and Snoop check in with Jamal, a young dealer Marlo has put in charge of watching his pigeon coops. Marlo tells Chris they are going to step back and wholesale their package to other dealers and let Avon take their corners. Marlo hopes to bide his time and have Snoop catch Avon unaware.

Lieutenant Cedric Daniels reports that Stringer Bell and Marlo Stanfield are the unit's new targets. He tells them that their work on Kintell Williamson is being put on hold. Leander Sydnor and Roland "Prez" Pryzbylewski are dismayed that their efforts to date are going to be wasted. Sydnor vows that one day he will work for a real department. Daniels calls McNulty into his office. On his way, McNulty asks Prez to look into the woman who he slept with (Theresa D'Agostino), pretending that it may be part of the case. Daniels accurately suspects McNulty of his involvement in their changing of targets via Major Colvin. McNulty admits his insubordination. Unapologetic, McNulty defends his decision, saying that it had to be done and thathe would have gone to the devil himself to get the unit's focus on Stringer Bell renewed. Daniels tells McNulty to find a new home as he is out of the unit once Stringer is arrested.

Freamon and Prez analyse the phone that Bubbles procured for the unit. Prez states that the information is difficult to interpret without knowing more about Marlo's organization. Freamon comments that a phone from the Barksdale organization would allow them to map out the organization with everything that they already know but it would be difficult to get a wiretap up with the phones being disposed of so quickly.

McNulty, Sydnor and Greggs restart their surveillance work. They begin with Bodie Broadus and wait for him to dump a phone. Greggs remembers him but McNulty does not. McNulty convinces them to drink with him, saying that he knows an easier way to find a phone. They narrowly miss seeing Avon meet with Bodie. Greggs comes home drunk and Cheryl tries to discuss what has happened to their relationship. Greggs tells her that she went along with Cheryl's desire for a child because she didn't want to disappoint her. Cheryl tells her she couldn't be more disappointed and asks Greggs to leave.

Prez sets up the board for the Barksdale and Stanfield investigation. So far he has pictures of Stringer, Bodie and Marlo among others. McNulty, Greggs and Sydnor arrive and begin to implement their plan to get a new cell phone.

Bodie and Puddin have moved into Marlo's now abandoned territory. Shamrock phones to recommend that they move more trade into Hamsterdam with so many police officers watching the corners. Bodie loads his crew into an SUV to relocate. McNulty and Greggs follow them stopping them on their way and protest that they are immune to police searches because they are headed to Hamsterdam. McNulty swaps out Bodie's phone for a similar model. The drug dealers become increasingly agitated as they perceive the unit’s actions as a breach of Colvin's promise. McNulty calls for back-up and Herc, Carver, Colicchio and Truck respond. McNulty asks Carver what Hamsterdam is, having heard Bodie mention it several times. Greggs also starts to question Carver, and he is forced to tell them about Colvin's initiative. Colvin arrives and explains his plan to the unit and asks them to keep it quiet. He pleads with McNulty to keep it from the bosses, and McNulty is impressed with Colvin's attitude.

They return to the detail office and give the phone to Freamon and Prez. Greggs asks Massey if she can stay at her place for a while. Prez reports the information he found on Theresa D'Agostino to McNulty. McNulty uses the number Prez obtained and cons his way into finding out her whereabouts. He travels to the fundraiser she is attending that evening. He is uncomfortable with the crowd and makes to leave but she notices him and arranges to meet him in her hotel room after the event.

McNulty is late into the unit office and finds ASA Pearlman and Daniels receiving a briefing on Freamon and Prez's analysis of the burners. They have identified a communication network with 15 distinct phone users by analyzing the call pattern. None of the phones identified list any user information because of the tariff and company used. They have identified a co-ordinator at the top of the pyramid. They have found that the phones are pre-programmed with the numbers before going into use. Freamon asks Greggs to have the Western DEU squad collect phones for them.

Greggs and McNulty meet with Herc and Carver and recruit them into phone collecting. Herc tells them that he saw Avon driving around. McNulty and Greggs both refuse to believe Herc's claim. On returning to the office they check Avon's status on the computer and are outraged when they find he has been parolled.

Having left the game for good Dennis "Cutty" Wise reapplies himself to the casual landscaping job he was working before. The crew boss continues to relate to him and convinces him to return to The Deacon. Cutty arranges a second meeting with the deacon and discusses his state of mind. He tells the deacon he is tired of doing things he doesn't want to do and wants to change. He asks the deacon to call him Dennis.

Retrieved from "https://thewire.fandom.com/wiki/Back_Burners?oldid=14657"
Community content is available under CC-BY-SA unless otherwise noted.